Local State Senator Lois Kolkhorst says the first two days of hearings into the state’s power grid failure has been marked by a “lack of candor and contrition”.

Kolkhorst says testimony from the Electric Reliably Council of Texas (ERCOT) and the Public Utility Commission (PUC), has left the senate committee, “with more questions than answers.”

She goes on to say, she was “personally appalled by the industry arrogance that brought Texas, a global energy leader, to a near statewide power blackout” and that “The Texas Senate will not rest until every question is answered and corrective action is taken to stabilize our power grid once and for all.”

Among the key takes from two days of hearings, according to Kolkhorst are:

--There was no plan of action, despite knowledge of the severity of the storm, five day before it struck.

--ERCOT had now way to communicate warnings to the public.

--Power generators saw the price for electricity spike during the crisis from under $100 per MWHr to the limit allowed by Th PUC of $9000 per MWHr.

Kolkhorst added that the consensus is that ‘changes will be made’.

Yesterday and today, the Texas Senate began its investigation into last week’s Arctic blast and devastating power grid failure.  While we heard from their testimony varied from the opaque to the truly tone deaf. The lack of candor and contrition from “industry experts” has only left all of us with more questions than answers.

- Meteorologists knew the storm was going to be a "pipe-bursting" winter event 5 days before Monday February 15th, but questions remain as to why there was no organized action plan to prepare our state for potentially deadly disruptions.

- ERCOT had no way to quickly communicate with the public to warn of the oncoming emergency, unlike how we are alerted to an amber alert or hurricane warning.

-Power generators saw the price for their product spike during the crisis from under $100 per MWHr to the limit allowed by Th PUC of $9000 per MWHr.

- The PUC Chair said that while she has the power to dissolve ERCOT under the Texas Utilities Code, the PUC doesn't have control over the day to day activities of ERCOT.  Alternatively the ERCOT CEO explained during the same day of testimony that the PUC does indeed have direct oversight of ERCOT.

- The PUC voted to raise wholesale prices to $9 a kilowatt hour on the wholesale market because they believed that the grid would fail without the price hike to bring generators into the “market” during the Arctic freeze. 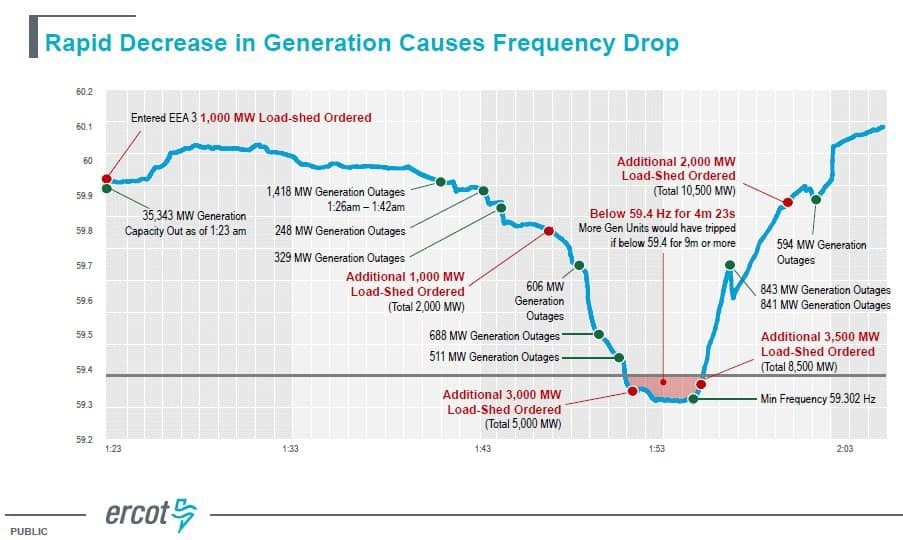 With dozens of Texans dead, and property damages climbing into the billions of dollars, those at fault must be held accountable.  This was an avoidable catastrophe that our state is only now beginning to unravel. Our entire state utility system must be reviewed and reformed to guarantee what happened last week never transpires again. Every aspect of the electrical market needs to be on the table, especially our state’s need to encourage new generation. We must also take a hard look at the aggressive push into wind and solar generation— an effort often funded with tax abatements that I have opposed for years.

These are complex issues to examine and address, whether it’s the unreliable nature of renewables, the flawed ERCOT model that serves more as a trading platform than an empowered grid protector, or the specter of price gauging during a life-threatening disaster. We are long past the time for more studies or mission statements.

The Texas Legislature must take bold action to correct the multiple power system failures seen last week. To that point, this past Monday I took my first action and authored SB 680 which clarifies that electricity is a necessity during a declared disaster.  Simple and obvious to anyone who has endured a tornado or hurricane, this legislation makes clear that just as outrageous spikes in the cost of water or gasoline after a hurricane are outlawed, the same predatory behavior is prohibited for electricity.

As your friend, neighbor and state senator, I am personally appalled by the industry arrogance that brought Texas, a global energy leader, to a near statewide power blackout. The Texas Senate will not rest until every question is answered and corrective action is taken to stabilize our power grid once and for all. There is consensus that change will be made.

I am done with cursing the darkness, now is the time to shine a light in every corner of this state’s electrical industry. Texans deserve straight answers and bold solutions. We should accept nothing less.