Fayette County Sheriff’s Deputies were involved in another high speed pursuit in the rural areas of the county in the pre-dawn hours Thursday.

Fayette County Sheriff Keith Korenek said this time the deputies may have stopped a human trafficking operation.  He says this is happening more and more in his county and he is getting frustrated.

It was just before two am Thursday when Fayette County Deputy Mark Zimmerman began following a suspicious truck driving slowly on a county road.  The truck suddenly drove away and the pursuit ensued.  After a short chasse the truck crashed into a ravine.  EMS crews then transported three people to a Fayette County hospital.   Three others were found a short time later, they too were suffering injuries from the crash.

Deputies ran a check on the truck and found that it had been stolen out of the Houston area.  Later on, the Sheriff’s Office office received a call from Guadalupe County that the same truck had fled their county.

Sheriff Korenek suspects this truck, and many others are involved in human trafficking operations that have been running through Fayette County.  The Sheriff says these people known as ‘Coyotes’ have no regard for their cargo, human life.  Sheriff Korenek says his office  has had three encounters with Coyotes  in the last three weeks.  He wants the citizens of the county to be aware of these events and if anyone has an issue with these incidents to feel free to contact the Sheriff’s Office. 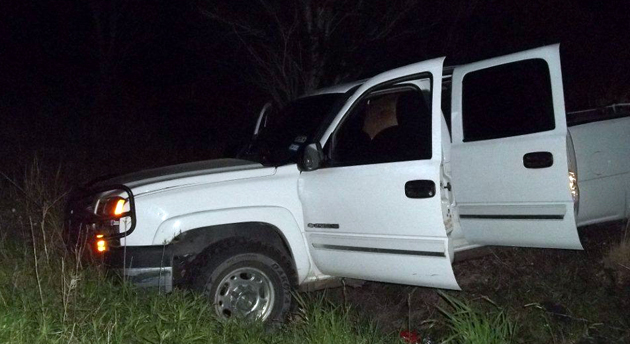 The stolen truck after it crashed into a ravine. Photo from the Fayette County Sheriff's Office.