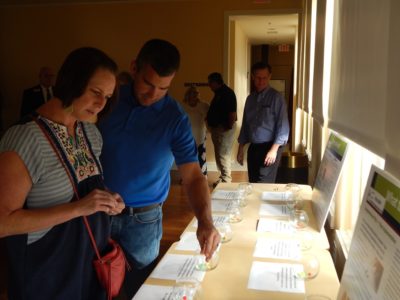 Citizens decide on which key initiatives they consider short-term priorities for the City of Brenham, as it moves forward with its comprehensive plan update.

Residents of Brenham seem to have a slightly different idea of what the priorities of the city’s future should be, compared to Brenham officials.

At least, that’s if the votes tallied from Thursday night’s open house at the Barnhill Center are any indication.

Representatives from planning consultant Kendig Keast Collaborative (KKC) posed the same questions to citizens as they did earlier Thursday to city officials: what would you consider the top five priorities as the city performs its sprawling comprehensive plan update?

Based on the votes from the few dozen in attendance, their priorities were: 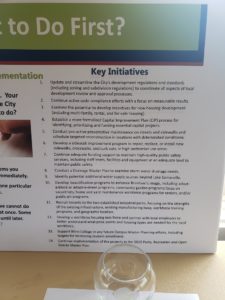 These are the 14 key initiatives both citizens and city officials voted on, debating which of these they considered top priorities.

It should be noted that, while this open house was a relatively small sample size, only two of these top five priorities—recruiting tenants for industrial parks and continuing funding for public safety services—aligned with that of public officials when they voted Thursday.

KKC Senior Associate Meredith Dang stressed that, no matter what order these came out in, all of these topics are part of the plan and will be addressed. She said this is just to try to see which efforts the city should focus on more immediately.

Dang added the firm will have a better idea of where the public stands on priorities once the results from an online survey come in. She said that survey was planned to be released at the open house, but technical difficulties prevented that from happening.  She said it should be put out within the next few weeks.

Update @ 9:25 a.m.: City Manager James Fisher has since stated there is not a "disconnect" between city officials and residents, and that these different meetings allow for different viewpoints.  He added the city is still gathering community input, pending the survey, and is moving forward.

One key initiative absent from the 14 available was “downtown Brenham”, which has been brought up as a focal point by many during comprehensive plan discussions. When Dang was asked why this was not an option, she said downtown is an “unspoken” priority, and has its own master plan to address issues specifically for the future of downtown.  She added, as she has received this question several times, staff will look to clarify that in the final version of the comprehensive plan. 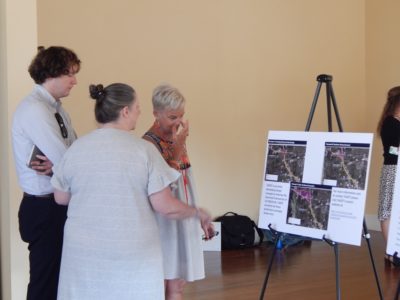 Residents look at a presentation detailing TxDOT's potential plans to rework the Highway 290 cloverleaf in Brenham.