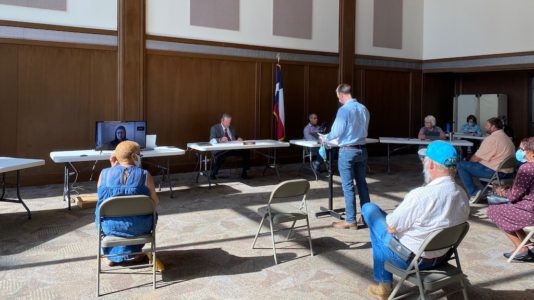 The first resolution was approved in efforts to reduce excessive noise. Judge John Durrenberger clarified that this resolution is not something Washington County can legally enforce, but more of a suggestion for residents to be mindful of neighbors.

Commissioner Joy Fuchs stated that this resolution follows complaints of noise coming from the gas plant in Old Mill Creek, as well as other increased use of land for other recreational and commercial uses.

Commissioner Candice Bullock, who attended the meeting remotely via video conference, said that the small town feel in Washington County is a luxury, and the goal of the resolution is to protect that luxury. Commissioner Kirk Hanath mentioned the growth of the community, and with neighbors being closer together than ever before, stated that citizens must remain cognizant of the effect actions may have on neighbors.

John Deans, owner of Deans Defensive Shooting, shared some concerns of the excessive noise resolution with commissioners. Deans stated that some people may be scared of the gun fire that can be heard from his range and does not want the resolution to force an unneeded trip from the Sheriff’s Office while he is teaching a license to carry course.

Deans said that shots are not fired at his range after 9 p.m. or on Sundays in order to be respectful to neighbors. Deans also offered to teach a seminar for landowners in Washington County on how to safely shoot on their property.

The second resolution was similar to the first but approved in hopes of preserving night skies. As the county’s population continues to grow, lights in the rural areas also grow. This resolution is meant to encourage citizens to limit light trespass from night lighting fixtures, as well as ask citizens to use efficient, cost-effective, and non-intrusive lighting to protect the beauty of the night skies.

County Judge John Durrenberger and Commissioners all agreed that the resolution regarding the preservation of night skies was similar in interpretation to that of the noise reduction resolution and encouraged citizens to remain mindful to neighbors at all times.

Also discussed at today’s meeting, GrantWorks, an Austin based company, was approved and designated as an administration service provider for the 2020 Community Development-MIT Program for application and project implementation that is administered through the Texas Land Grant Office (TLGO). The TLGO grant has a minimum assistance amount of $3 million, with a maximum amount of $50 million, with a one percent match. This grant will be used to fix flooding and drainage issues in Washington County.

Also discussed and approved at the meeting:

·      The approval to purchase a vehicle for Precinct 1 Deputy Constable,

·      And the installation of a two inch bore for a one-inch water replacement line at 5775 Doe Run Lane in Sandy Creek Estates.