Washington County Commissioners have signed off on an agreement to provide road repairs for the City of Burton. 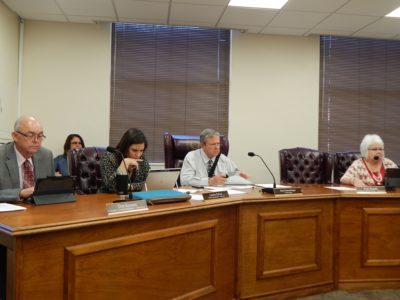 County Engineer Ross McCall said the county Road and Bridge Department has been trying to categorize and address over 700 requests in the past few months. He said the department has seen “great improvement and strides” in efficiency, and believes it is currently in a state where it can partner with the City of Burton and handle this request.  McCall said this partnership is a responsible thing to do, but reiterated that the county’s first priority is investing in issues that affect the whole county.

As per the agreement, the county will provide labor, while the city will purchase the supplies. A verbal quote from McCall at the Burton City Council’s last meeting estimated repairs at $2,200.

Holle said his department is looking at having a non-aggressive dog that is trained in narcotics and human tracking. The dog could potentially be taken to schools and events.  Commissioner Joy Fuchs said the program should be beneficial, citing the success of the program in Precinct Four.

Holle said the program will be run 100 percent through donations, at no cost to the county. He said his office is looking at a total of $25,000 to get the program up and running.

During the Washington County Sheriff’s Office monthly report, Operations Captain Claude Free warned officials about the high amount of attempted fraud seen recently through telephone solicitation. He said the Sheriff’s Office continues to see a high amount of reports, and mentioned that several Sheriff’s Office employees have received calls from prospective scammers in foreign countries.  He urged people to pay attention to the phone calls that come in, and to be careful.

The court also rescinded its approval of a contract with Otis Elevator Company to provide labor and material for the elevator in the courthouse annex. County Judge John Durrenberger stated the contract had omissions that could not be accepted.

The county will proceed to go out for bids for the project. Bids will be due to the county by December 9th at 5 p.m., and will be opened December 10th in commissioners court.