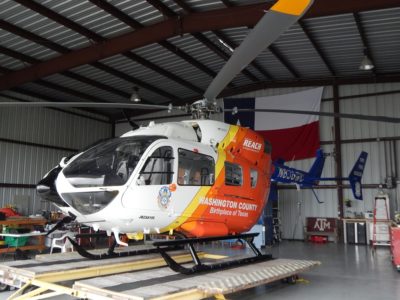 The aircraft came in Sunday, ahead of the projected peak of the COVID-19 crisis in Texas.  The helicopter is temporarily being held at the Brenham Municipal Airport, before it is moved to a more permanent location.  EMS Director Kevin Deramus said department officials are in discussions on where is best appropriate for the aircraft, but assured it will be put where it can best serve the community.

Deramus said the helicopter arrived in Brenham after several months of undergoing inspections at Metro Aviation in Louisiana and conformity checks from the Federal Aviation Administration in Sacramento, California.

EMS Aviation Division Chief Casey Ping said the helicopter will be capable of providing a wide range of services, at no cost to county residents.

Through the county’s contract with REACH Air Medical Services, REACH is providing the multi-mission helicopter and complete flight service support, including aircraft operating costs, pilots, mechanics, and a hangar and crew quarters.  REACH will reimburse the county for all employee salaries, program direction, administrative oversight, and crew quarters. 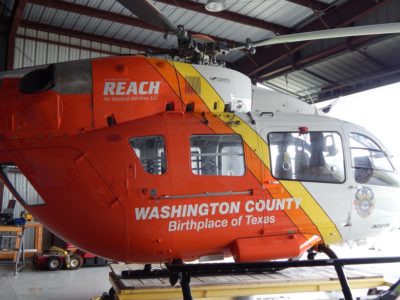 Should the primary aircraft need routine, scheduled, or unscheduled maintenance, the contract guarantees the county usage of an equivalent backup helicopter.

Ping said this program will also help to free up EMS resources during the COVID-19 pandemic.

In March, commissioners approved an AirMedCare Network municipal site membership for the county, which will allow the helicopter to be utilized for county residents in both Washington and surrounding counties.  Deramus said county residents will not be given copays when transported, as their insurance will pay for the cost, and anything left would be covered under the municipal site membership.  People without insurance can still utilize the service, but will be billed for Medicaid rates by the county. 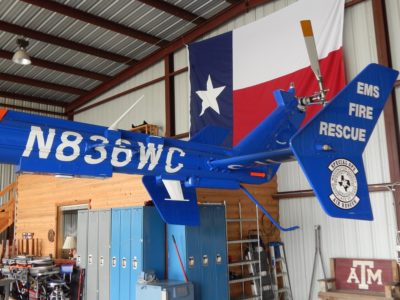 County residents can add to their coverage through a subscription program costing $45 to $65 annually, which Deramus said would cover them and anyone in their homes wherever they are in the state.  Their AirMedCare Network membership would not cover all helicopter providers, such as PHI, but would cover providers that are considered sister companies under the plan, such as REACH, Air Evac, Guardian Air, CALSTAR, and Med-Trans.  Deramus said residents will soon receive information in the mail on the options available.

Ping said the target date to start the program is April 15th, although he acknowledged it could slide a few days beyond that date due to expected inclement weather potentially hindering some pilot training.

Deramus said he hopes to have a ribbon cutting for the helicopter, once this COVID-19 situation passes.