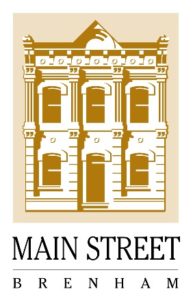 Brenham’s Main Street program celebrated 20 years Thursday night, along with some of the program’s most influential members.

The Barnhill Center hosted “An Autumn Evening on Main”, marking 20 years for the program with a reception dinner, auction, and recognition of three individuals with Distinguished Main Street Honoree Awards.

Whitehead has served numerous terms on the Main Street Board, and has been active on the Promotion Committee for many years. He was instrumental in early planning of Tastes, Tunes and Treasures that eventually became Hot Nights, Cool Tunes. He has worked diligently on Main Street events, including Uptown Swirl, Spring Eggs Art Walk, Summer Sip and the Scarecrow Extravaganza, and on the creation of the Downtown Master Plan.

In addition, through KTEX/KWHI, Whitehead has been a major sponsor of events and promotions that help keep downtown Brenham a vital and thriving part of the community.

Brad and Jenny Stufflebeam first opened Home Sweet Farm Market in downtown Brenham in 2013 as a farm store, and expanded in 2015 with a biergarten and live entertainment. It was this venture that took downtown to the next level, serving as a catalyst for additional nighttime activities for locals and visitors.

Brad was also a co-founder of the Texas Arts and Music Festival, a 501(c)3 non-profit developed to promote music and arts throughout Downtown Brenham, with the first festival in 2016. Each year, the murals painted during the festival bring thousands to the community.  In addition, the Stufflebeams have been instrumental in collaborating with other business owners on the Brenham Bounce, and holding a Gumbo Cookoff and Chili Throwdown annually.

Former Brenham Main Street Manager Jennifer Eckermann said Thursday night’s program also revealed details on a Main Street project that has been in the works since 2015.

The documentary’s full showing in January will be held at the Barnhill Center. More details are expected to be released in the coming weeks.