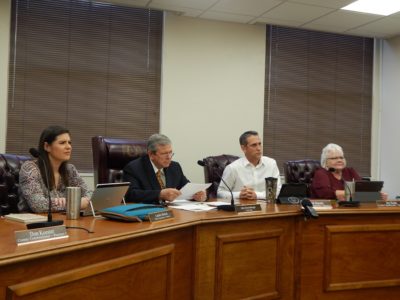 Commissioners gave their approval of a resolution declaring the county a “Second Amendment Strong Hold County”. The resolution states the county acknowledges the “unalienable right to keep and bear arms” as specified in the U.S. Constitution and later rulings of the U.S. Supreme Court.

The resolution also says the county will not authorize or appropriate government resources for the purpose of enforcing or assisting in the enforcement of any regulations that “infringe on the right by the people to keep and bear arms”.

Commissioner Kirk Hanath said the Second Amendment is one of only a few that are being targeted, and that public officials are too often criticized for having a mind of their own.

Commissioner Joy Fuchs and County Judge John Durrenberger both said they received several calls from constituents in favor of the resolution. Fuchs said it is very important to not forget history, in order to not repeat it.

Commissioner Candice Bullock said commissioners are all on the court to run the county based on values and traditions, and said this is a “very necessary right”. Durrenberger added that the court is here to “do the will of the people”.

Fuchs said Commissioner Don Koester, who was not present at the meeting due to a death in the family, was also in support of the resolution.

Also at today’s meeting, commissioners heard from Garry Kimball of Specialized Public Finance, the county’s financial advisory firm, regarding the refinancing of previously issued debt.  In 2010, the county issued $1.96 million in bonds at an interest rate of 4.5 percent.  Kimball said the current market is just under 2 percent, so by refinancing, the county could cut the interest rate more than in half.

Kimball said this is the county’s first opportunity to take advantage of these savings, as in 2017, restrictions were imposed on political subdivisions’ abilities to refinance tax-exempt bonds.  He said the county just entered into the eligibility window, within 90 days of the call-date on the bonds.

Kimball said the amount the county could expect to save is roughly $14,000 a year over a six-year period.  However, according to Kimball, current market shows the savings at closer to $16,000 a year.  He said his company will meet next week with a bond rating agency, and hopes to price the deal on February 3rd, which would lock the interest rate and savings in.

Commissioners approved an order authorizing the refinancing.  Hanath said the county considered using reserve funding to pay the debt off rather than refinancing, but said it makes more sense to refinance it at a lower cost.  Fuchs noted that the county is currently in a position where it could comfortably pay the debt off in reserves.

The court also approved entering into a lease agreement with Bob Handley for a hangar at the Brenham Municipal Airport.  The hangar will be used for Washington County EMS’s Aviation Department multi-mission helicopter.  REACH Air Medical Services will reimburse the county for the cost of the hangar.

The full Second Amendment resolution approved by commissioners can be seen below:

WHEREAS, removing Texans’ right to bear arms and restricting the opportunity to protect themselves and their property is in contradiction to the U.S. Constitution; and

WHEREAS, a criminal’s intent to harm others is a selfish act that is destined to occur regardless of whether firearms are available or not. By disarming the law abiding individuals, the criminal element that is intent on not adapting to the society in which they live is given the advantage; and

WHEREAS, the Declaration of Independence states that people are “endowed by their Creator with certain unalienable Rights, … to secure these rights, Governments are instituted among Men … deriving their just powers from the consent of the governed”; and

WHEREAS, John Adams wrote in 1A Dissertation on the Canon and Feudal Law (1765): I say RIGHTS, for such they (the people) have, undoubtedly, antecedent to all earthly government, Rights that cannot be repealed or restrained by human laws, Rights derived from the great Legislator of the universe.”

It is the natural tendency of civil government to expand beyond the limits of its rightful Constitutional authority and to usurp powers which have not been given to it through the delegated consent of the governed.

Whenever the uses of government are perverted, individual sovereignty is overtly endangered or threatened, and all other means of redress are ineffective, the People may, and in fact ought to, force the reestablishment of the original constitutional limits of government.

WHEREAS, resistance against arbitrary power and oppression is the obligation of every Patriot, as not to do so is destructive to the good and happiness of mankind. In fact, it is the duty of the People of Washington County, Texas through the actions of their lesser magistrates, namely local elected officials and sheriffs, to challenge the civil government when and where it exceeds or threatens to exceed its bounds.

WHEREAS, the Constitution of the United States is the Supreme Law of our nation; and

WHEREAS, the Second Amendment to the Constitution of the United States of America states: “A well-regulated Militia being necessary to the security of a free State, the right of the people to keep and bear arms shall not be infringed.”; and

WHEREAS, the U.S. Supreme Court found in Miranda v. Arizona (1966) that “Where rights secured by the constitution are involved, there can be no rule making or legislation which

WHEREAS, the U.S. Supreme Court in District of Columbia v. Heller (2008) affirmed that the Second Amendment right to keep and bear arms is not connected in any way to service in a militia; and

WHEREAS, the U.S. Supreme Court in United States v. Miller (1939) stated that firearms that are part of ordinary military equipment with use that could contribute to the common defense are protected by the Second Amendment; and

WHEREAS, the Fourteenth Amendment to the Constitution of the United States, Section 1, states: “No state shall make or enforce any law which shall abridge the privileges or immunities of citizens of the United States; nor shall any State deprive any person of life, liberty, or property, without due process of law; nor deny to any person within its jurisdiction the equal protection of the laws.”; and

WHEREAS, the U.S. Supreme Court in McDonald v. City of Chicago (2010) affirmed that a person’s Second Amendment rights to “keep and bear arms” is further secured by the “due process” and the “privileges and immunities” clauses of the Fourteenth Amendment. The decision also protects rights closely related to the Second Amendment, namely the right to manufacture, transfer, purchase, and sell firearms, accessories, and ammunition; and

WHEREAS, the Texas Constitution, Article 1. Bill of Rights, provides Sec. 1. Freedom And Sovereignty Of State. “Texas is a free and independent State, subject only to the Constitution of the United States, and the maintenance of our free institutions and the perpetuity of the Union depend upon the preservation of the right of local self-government, unimpaired to all the States.” Sec. 23. Right To Keep And Bear Arms. Every citizen shall have the right to keep and bear arms in the lawful defense of himself or the State; but the Legislature shall have power, by law, to regulate the wearing of arms, with a view to prevent crime. Sec. 24. Military Subordinate To Civil Authority. The military shall at all times be subordinate to the civil authority; and

(a) A person who has been convicted of a felony commits an offense if he possesses a firearm:

(a) The unalienable right to keep and bear arms, as specified in the Second Amendment to the US Constitution, the Constitution of, and further up held by subsequent decisions of the US Supreme Court;

(b) The right, as originally written and understood, to keep and bear arms for selfdefense, personal safety, protection of one’s family, and in defense of one’s community and county;

(c) The right to manufacture, transfer, purchase, and sell firearms and ammunition designed for those purposes outlined above, rights guaranteed by the US Constitution and the Constitution of Texas;

(d) Furthermore, any regulation of the right to keep and bear arms or affiliated firearm rights that violates the Second, Ninth, Tenth, or Fourteenth amendments to the US Constitution, that violates Article I, Sections 1, 23, 24 Code of the Texas Constitution and/or bypasses the Texas Penal Code Section 46.04 (1), (2) including Section 22.01 (1) and (2), or that violates numerous related U.S. Supreme Court decisions including those listed above shall be regarded by the People of, on, or in Washington County to be unconstitutional, a transgression of the Supreme Law of the Land and its spirit of individual sovereignty.