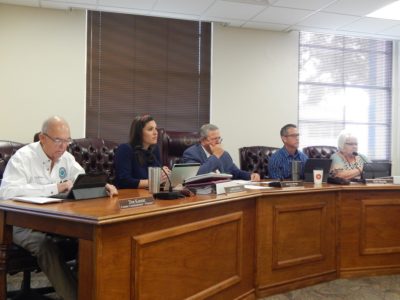 On Tuesday, the court heard monthly reports from officials with the Sheriff’s Office, EMS and E-911, each commenting on how the increased pay has helped their departments fill open positions.  Over the past two months, commissioners approved increases of $2 per hour for several positions in each department.

Deramus said EMS has made conditional job offers to three people, with two of them accepting.  He said the department now only has two full-time openings.

Chief Deputy Jay Petrash said the Sheriff’s Office is still recruiting jailers, but has filled some open positions.  He said he plans to send one jailer to academy from August to December in hopes of filling the last open patrol position.

E-911 Director Kristi Stamnes said the bump in pay has “made a world of difference” for her department.

After the three new hires, Stamnes said E-911 is still searching for one dispatcher and two night supervisors.  She hopes to move in-house staff to the supervisor positions in order to make all openings regular dispatch positions.