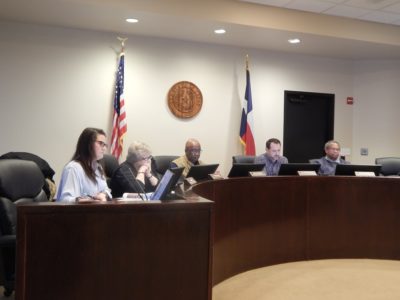 The Brenham Planning and Zoning Commission unanimously recommended passage of the 2022 Thoroughfare Plan at its meeting Monday.

The plan, which acts as a comprehensive wish list of major public improvements and development over the next 20 years based on city research and public feedback, will now go before the city council for consideration and possible adoption on February 3rd and February 17th.

City of Brenham Project Planner Shauna Laauwe recapped the plan presentation given to city officials during a workshop on January 10th.  One change to the plan since that meeting reflects that TxDOT has started discussions sooner than expected with property owners who would be affected by the new Highway 290-Highway 36 interchange alignment.

Other changes to plan documents were the removal of a proposed collector street off of Burleson Street and minor corrections to the truck routes map.

Since the workshop on January 10th, two public comments were submitted.  One resident, Allan Oberrender, expressed the need for bike lanes, a bike rack requirement for apartment complexes and businesses, and the need for a bus or shuttle system in Brenham.  Another anonymous commenter asked for the city to look at repairs to East Stone Street from South Day Street to South Market Street.

One resident, Ronnie Becker, spoke on Monday, asking for a change to a proposed bike and pedestrian route along Little Sandy Creek that would have part of the path going along his north property line.

The draft of the proposed plan can be seen here.