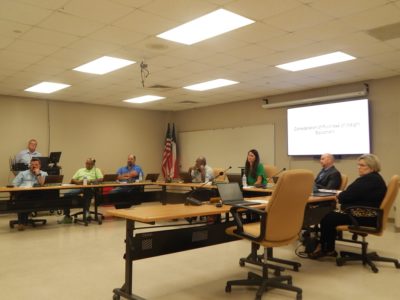 Superintendent Dr. Tylor Chaplin said the district has put out requests for proposals for architecture and engineering services to look at the junior high school from a structural standpoint, including the foundation and the walls.  He said some of the firms from those proposals will give presentations to the board in the future, although no timeline was given.

Dr. Chaplin then asked the board which direction it wants to take in the coming months.

After discussion, the board agreed to bring in some returning members of the committee that worked on the previous bond measure, as well as new members and people who were opposed to the bond.

Dr. Chaplin said he would get to work on forming the committee group so it can give the district a recommendation on how to proceed.  Board President Natalie Lange suggested putting together a public survey to get further feedback, especially from residents who voted against the proposal.

When asked what the level of participation was at the district’s open house events that were hosted to offer more information on the bond, Dr. Chaplin said it was not a large amount.

Dr. Chaplin said it would be a good idea to reach out to voters to see what people liked about the bond, what they did not like and what could have been done differently.  Trustee Jared Krenek said, with Board Vice President Tommie Sullivan and Board Secretary Susan Jenkins agreeing, that the junior high school has to be addressed and that the district should consider a bond proposal concerning just the junior high campus.