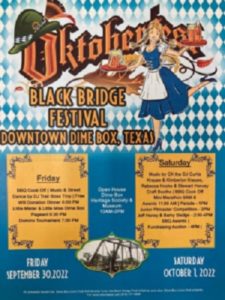 Dime Box residents are going to be ending the month of September and kicking off the month October with the 48th Annual Black Bridge Festival and Mini Marathon coming to the downtown area.

The festival begins on Friday, September 30, with a barbecue cookoff along with music and a street dance featuring KTEX 106’s Trail Boss Troy as the D.J.

There will also be a Free Will Donation Dinner at 6pm, followed by the Little Mister and Little Miss Dime Box Pageant at 6:30pm, and a domino tournament beginning at 7pm.

Then on Saturday, October 1, there is going to be a Mini Marathon at 9am with an awards presentation at 11am.

The Dime Box Heritage Society and Museum will hold an open house from 10am-2pm.

The Black Bridge Festival Parade is scheduled to begin at 1pm, followed by the Junior Pitmaster Competition at 2pm.

Other activities include music, craft booths, a fundraising auction, and a drawing.