The Local History Day program offered in downtown Brenham in the spring for Brenham ISD students could see changes. 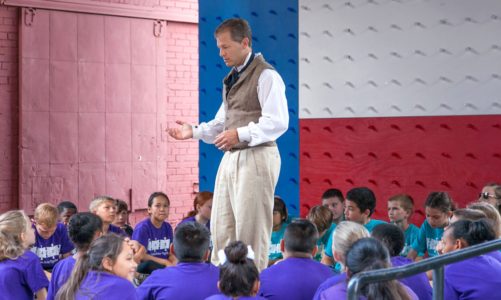 At Monday’s Main Street Board meeting, city staff recommended that a more simplified version of the program be put together, citing the numerous volunteers and man hours needed to organize the event.

Some proposed suggestions included potentially pre-recording some parts of the program, and reducing the footprint to fit around The Barnhill Center instead of having actors and elements spread out in various locations.

The last Local History Day was held in March 2020, prior to the COVID-19 pandemic.

Also at Monday’s meeting, the board approved an Economic Impact and Innovation Grant application from the Brenham Heritage Museum.  The museum will be awarded $15,000 for its interior exhibits and displays.  The award amount is split evenly between funds raised by Main Street Brenham and the Brenham Community Development Corporation.

The museum is set to reopen on November 17th.

The board also reviewed the parklet application from Mescalito Coffee at 100 East Alamo Street.  In addition, it recapped the Main Street strategic planning workshop from September 26th, with downtown parking being one of the focus topics.

Ongoing and upcoming events in downtown were discussed by the board.  So far, 65 ballots have been cast for the Scarecrow Extravaganza.  Voting ends on October 23rd, and the winners will be announced on October 26th.  Other activities in downtown include the First Friday Farmer and Artisan Market this Friday, the Brewstep 0.1 K on October 15th, the Texas Arts and Music Festival on October 15th and 16th, and the Christmas Stroll and Lighted Parade – themed “A Storybook Christmas” – on December 3rd.