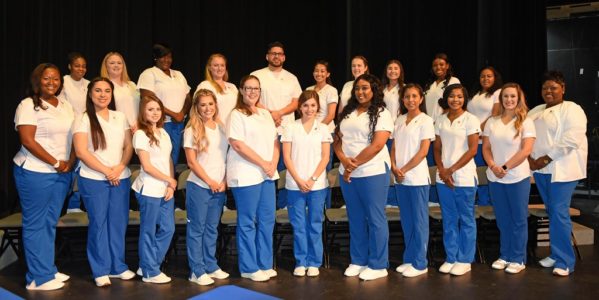 Blinn College welcomed a new slate of vocational nursing graduates to the profession at a special ceremony in Brenham Thursday.

Program Director Michelle Marburger said the ceremony is a celebration of students’ hard work and dedication throughout the 10-month program.  She said Blinn’s curriculum and faculty are “the cornerstones” of its program, and the College has enjoyed preparing students to enter the nursing workforce as “caring and compassionate caregivers”.

In the program, students spend 35-40 hours each week engaged in classroom, laboratory, and clinical experiences, with significant additional time required for study.  Through the program, students are provided the education and training necessary to become highly skilled licensed vocational nurses capable of working in a variety of medical settings, including home health, dialysis, hospitals, clinics, and physicians’ offices.

Program graduates are eligible to take the National Council Licensure Examination (NCLEX) and the Nursing Jurisprudence Examination, and are considered licensed vocational nurses after passing both exams.

Approximately 98 percent of Blinn-Brenham vocational nursing graduates in the past five years have passed the NCLEX, including a 100% pass rate in 2013, 2015, and 2016.  The statewide average is approximately 87 percent, and the national average is roughly 84 percent.