The Brenham City Council officially proposed a new tax rate of 50.4 cents per $100 valuation for the new fiscal year at its meeting today (Thursday). 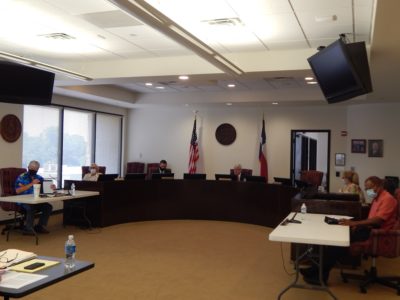 The council voted unanimously to propose the new rate, which is one cent cheaper than the city’s tax rate a year ago.  The rate is made up of 32 cents for maintenance and operations—the same as last year—and 18.4 cents for debt service, one cent less than a year ago.  As the proposed rate does not exceed either the no-new-revenue tax rate or the voter-approval tax rate, a public hearing is not required.

With this proposed rate, the tax on the average homestead in Brenham will actually decrease from $904 to $897, despite an increase in the average homestead taxable value in the city.  City Manager James Fisher said the level of change on residents’ tax bills will vary, but the city felt a conservative approach to the tax rate was necessary.

Formal adoption of the tax rate will not come until the council’s meetings on September 3rd and September 17th.

Also at today’s meeting, the council unanimously approved an ordinance on its first reading providing for no parking zones in certain areas along West Second Street, West Fifth Street, Green Street, and High Street.  Blinn College has reached out to the city to ask about establishing no parking areas on portions of these roadways—which all front College property—in order to help keep students dedicated to specific parking lots.

Fisher said the city should consider revisiting this item once the College completes its new academic and residential buildings, as he does not want these no-parking zones to inadvertently push students into parking in front of homes.

During Fisher’s COVID-19 update to the council, he stated that starting Monday, Brenham City Hall will reopen to the public with operating hours of 11 a.m. to 4 p.m.  He hopes that City Hall can go back to a regular 8 a.m. to 5 p.m. schedule by September.

Also during session, the council: