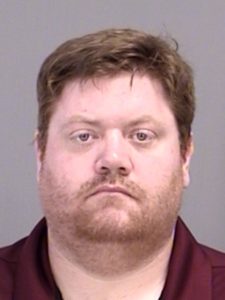 A Burleson County Grand Jury has indicted a Caldwell Police Officer for Official Oppression in the case of Chester Jackson Jr.  District Attorney Julie Renken’s office released a statement today stating that Sgt. Robert Baucom of the Caldwell Police Department was indicted Tuesday for the Class A Misdemeanor offence of Official Oppression.  Baucom turned himself into the Brazos County Jail this (Thursday) morning and posted the $1000 bond that was set by Judge Carson Campbell.

The release goes on to state that the Grand Jury heard from 7 witnesses and reviewed all relevant videos from the events involving Chester Jackson Jr. in the Burleson County Jail.  Jackson reportedly spent 3 days in the jail before being transferred to Cross Creek Hospital in Austin because of his mental condition.  After just a few hours at Cross Creek, the 30-year-old was rushed to another hospital and placed on life support.  The release states that the Texas Rangers interviewed the medical personnel attending to Jackson and found no evidence that the actions of Sgt. Baucom caused the medical condition of Jackson.  Official Oppression caries a range of punishment that includes up to one year in the Burleson County Jail and up to a $4000 fine.

According to Jackson's attorney, U.A. Lewis, Jackson has also been indicted for Assault of a Public Servant, but no details have been made public on the assault at this time.