CITY OF BRENHAM TO RECEIVE $50,000 HEB GRANT FOR SPLASHPAD

The City of Brenham’s recently approved splashpad will have some extra amenities upon arrival, thanks to a $50,000 grant from H-E-B. 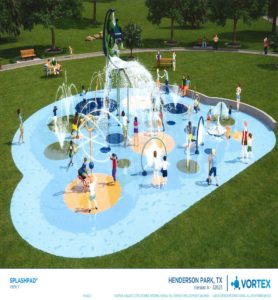 A rendering provided by Vortex of the splashpad proposed at Henderson Park.
(courtesy City of Brenham)

Public Works Director Dane Rau announced at Wednesday’s Parks and Recreation Advisory Board meeting that H-E-B has committed to a $50,000 grant for the splashpad project, through the H-E-B Tournament of Champions Charitable Trust.

The grant will assist with requested amenities at the splashpad, such as extra shade and bathrooms.  Community Services Specialist Crystal Locke said the city should receive the check in late March.

In January, the Brenham City Council awarded a $250,407 contract to Vortex for the design, equipment, and installation of the splashpad.  The city is using $300,000 in earmarked funds from the Brenham Community Development Corporation (BCDC) for the splashpad project.

The unit uses a pass-through water system that does not recirculate water for sanitation purposes.  A drought contingency plan is in place for the splashpad, which would be the first thing to be turned off in case of a drought.

Locke said the city’s tentative timeline for the project calls for the splashpad to be open to the public around the first part of May.