COMMUNITY REMEMBERS LIFE OF MATTHEW SPAHN ONE YEAR AFTER PASSING 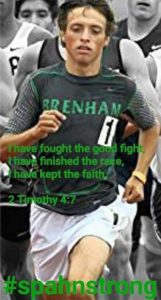 One year has passed since the death of a celebrated Brenham High School student and athlete.

Matthew Spahn suffered serious injuries after he was struck by a car while walking along Gun and Rod Road in Brenham on October 7th last year.  He fought for his life for over a week, but succumbed to his injuries on this day a year ago.  He was 21 years old.

Matthew’s father, Jordan Spahn, said his family is grateful for the community’s love and support shown during that difficult time.

Spahn said he knows things have been hard for not just his family, but for all families involved, as well as the entire Brenham community. He said the community’s outreach after Matthew’s death, and the death of Matthew’s brother, Jonah, has helped him and his family pick each other up and move forward in life.

Spahn said he has no anger, only compassion for everyone involved, and hopes everyone will be able to find peace.

Matthew was a state qualifier in cross country at Brenham High School, and after graduating, went on to run at Pratt Community College in Kansas.

Matthew was an organ donor, and upon his death gave several of his vital organs, including his heart. His father said doctors told him seven of Matthew’s organs saved five lives.

Spahn said Matthew achieved his ultimate purpose in life, and that was to bring people together, and bring them happiness.