Next weekend’s First Friday Farmer and Artisan Market in downtown Brenham has been cancelled, along with its proposed replacement. 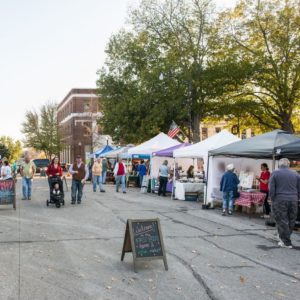 The original August market along Baylor Street was cancelled several weeks ago, with the city’s announcement in early July that all city-wide events would be postponed to the fall.  Organizers recently began looking into setting up a pop-up farmers market, stationing vendors inside and outside local businesses downtown, but the idea ultimately failed to come to fruition for now.

According to Market Manager Alexandra Dill, soon after the city’s announcement, she was contacted by a local storeowner asking if there were any vendors who would be interested in showing their goods at her store, knowing that many vendors rely on the downtown markets to make a living.

Dill then emailed various downtown businesses to see if anyone would be willing to host a vendor, with eight businesses responding that they could host inside, and others saying they could only do so outside.  After that, she emailed the usual market vendors to gauge their interest, and received 20 responses from vendors indicating they would be interested.

Dill said, in an attempt to accommodate the interested vendors, she placed who she could in the indoor locations first, then the others outside to help connect the flow of traffic around downtown.  She said vendors would have been spread out down Alamo and Park Streets to link up the vendors at Pioneer Smokehouse and Home Sweet Farm with the majority of vendors on Alamo Street.

Dill said organizers felt that the idea presented to them could work to support downtown businesses and local vendors in a “safe, small-scale way”.  She noted that at any given point in time during a Friday market, there might be around 25 shoppers at a time, so there were not major concerns about having a “mass gathering”.  She also stated that shoppers would not be encouraged to visit all of the vendor locations, especially since many of them have a few specific vendors they buy from.

Dill hopes for a return of the market in September, either in the traditional method along Baylor Street or the proposed pop-up format.