The Brenham City Council approved the postponement of all city-wide events until the fall at its meeting today. 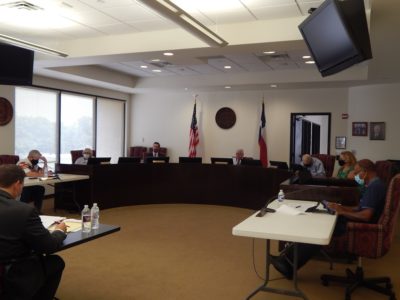 The city’s postponement of the events adheres to the provisions of the executive order issued on June 26th by Governor Greg Abbott. The executive order declared that outdoor gatherings of 100 or more people must be approved by local governments, with certain exceptions.

The events affected include the 2020 Hot Nights Cool Tunes Concert Series, the July 19th Community Picnic, Movies in the Park, and the Summer Sip and Art Walk.

Councilmember Susan Cantey said it is the council’s job to keep citizens safe and felt that it was appropriate to postpone the events until Fall when it is more conducive to keep people healthy. Cantey also said that deferring the events is the sensible thing to do.

Councilmember Albert Wright said that it is better for citizens to wait to get back out there than to get out there too soon and end up in the cemetery.

The council revisited the matter regarding the Summer Sip and Art Walk Event after Main Street board member and Promotions Committee Chair Tom Whitehead sent an email mid-meeting with the details of the event asking that it not be grouped in with the other large gatherings in question.

Whitehead shared that there are only 288 glasses sold for the event, and there are 25 stores participating. He said if 288 people were to show up to the event, that would still only be 11 and a half people per business, and Main Street was going to have volunteers help monitor the number of people inside individual stores to ensure at no time is there a gathering of people.

According to Whitehead, Main Street has been selling glasses for three weeks now and has collected $3,250 in sponsorships. Whitehead said that a poll was taken with participating businesses a few weeks ago regarding the safety around COVID-19, and the businesses still wanted to participate. It was also shared that the small, downtown businesses in Brenham are hurting financially, and the Summer Sip and Art Walk event was going to be a big event for them.

Ultimately, after further discussion of the event, the council decided that it was important to remain consistent in their decisions, and emphasized that the event is not canceled, just postponed.

The new dates for the four events have not been announced and will remain unscheduled until there is less uncertainty around the future of COVID-19.