A 2015 graduate of Brenham High School and former Eagle Scout was arrested Wednesday, after police say he brought several weapons to a park in Austin. 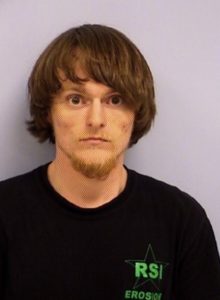 23-year-old Dalton Broesche was taken into custody Wednesday afternoon at Pease Park, after authorities received reports of a man carrying an assault rifle and a large knife in a backpack. According to police, 911 dispatchers were told by callers he was walking toward a “party with lots of kids”.  Callers gave dispatch the license plate number on the vehicle Broesche was seen driving.

When officers arrived at the park, they found Broesche walking between the trail at the park and the roadway. According to the arrest affidavit, he was carrying what looked like a large knife on either his back pocket or strapped to his belt.  While searching him, police said they found a loaded 9mm handgun with another fully loaded magazine.  They also found two knives, an extendable metal baton, a flashlight and black gloves.

According to the affidavit, Broesche told police he threw the rifle he was carrying into the brush off the main trail. Officers found the AR-15 semi-automatic rifle on a footpath that leads from the main trail to the roadway, about 50 yards from where he was apprehended.  According to police, the rifle was loaded with a 30-round magazine, and fitted with a bipod, scope, and tac light.

Broesche was charged with two counts of Unlawful Carrying of a Weapon, and is in the Travis County Jail on $55,000. Broesche is prohibited from possessing any firearms if he bonds out of jail.

During his arrest, Broesche was also found to have a warrant out of Harris County from an incident in July 2018, where he is accused of assaulting his girlfriend and threatening a resident with a knife. According to the Harris County Sheriff’s Office, Broesche was angry because “he could not leave due to his brake lights not functioning.  Records show one of the victims in the case asked in June for Broesche’s bond to be reduced to no bond, saying “the safety of the victim appears to be in danger”.