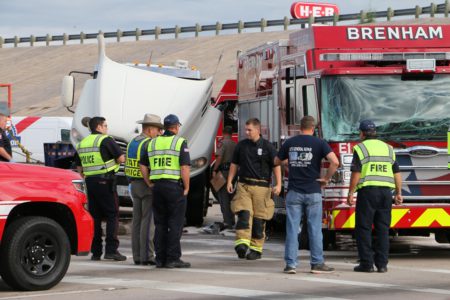 Emergency crews work the scene of the accident at the US 290 and SH 36 intersection in Brenham on June 1, 2017.

A lawsuit has been raised against the City of Brenham, stemming from an accident involving a Brenham fire truck.

In the civil case Robert Sontag v. Justin Schroeder and the City of Brenham, filed May 30th, plaintiff Sontag alleges he sustained injuries from an accident on June 1, 2017.

According to court documents, Sontag, a Brenham resident, was headed east on Highway 290 in a tractor trailer, entering the intersection at Highway 36 with a green light.

Sontag’s plea say the fire truck, driven by Schroeder, entered the intersection on a red light without the emergency lights or sirens on.  The plea said Sontag tried swerving to the right, but could not avoid colliding with the fire truck.

In Sontag’s plea agreement, he alleges he suffered damages of medical care and expenses, physical pain and conscious suffering, mental anguish, physical impairment, and loss of earnings. He states Schroeder was negligent in operating the fire truck, and says the City is liable for negligent entrustment.

A joint motion was made July 2nd by defendants Schroeder and the City to dismiss Schroeder from the suit, while the City has asserted sovereign immunity from the suit based on Sontag’s pleadings.

The Brenham City Council will seek legal counsel on the matter from City Attorney Carey Bovey when it meets in executive session Thursday afternoon at City Hall.