Brenham officials are proceeding with plans for a splashpad at a local park. 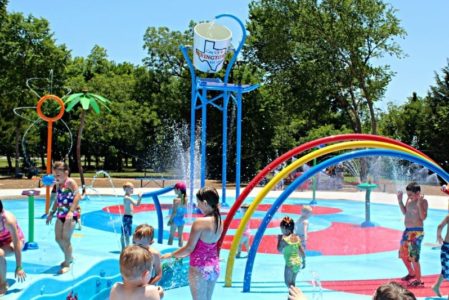 Brenham Parks and Recreation Advisory Board members met Wednesday to further discuss the idea of having a splashpad, and whether to put one in Fireman’s Park or Henderson Park.

The board also discussed the responses received from a recent community survey, which asked the public to give its thoughts on the project.

Public Works Director Dane Rau said, after consulting the survey results and considering long-range planning, the staff consensus was to put the splashpad at Henderson Park, citing available space and abundance of parking.

Rau said the city will need to address some infrastructure and amenities, such as shade and restrooms. He said some of those concerns can be phased in at the park over the next two to three years, and added staff are working on putting together a plan of amenities for the park.

During the 2019-20 funding request from the Brenham Community Development Corporation (BCDC), $300,000 was awarded for the addition of a splashpad in a city park. This was also part of the park’s master plan and was earmarked for 2020. Rau said the city has also applied for a $200,000 grant through H-E-B, and is awaiting a response.

Rau said the city will meet with a splashpad vendor to get designs started in December, and will hopefully start construction sometime next year. He said, ideally, there will be a splashpad down in March or April.

Also at Wednesday’s meeting, the board agreed to apply for a $750,000 grant through the Texas Parks and Wildlife Department Local Parks Grant Program, for the first phase of the Brenham Family Park. The first phase of the proposed park, to be located behind the Baker Katz development between Highway 36 and Highway 290, will include outdoor recreation features like a wildflower viewing area, walking trails, security lighting, and a four-acre pond.  The Brenham City Council will vote on the submission of the grant application at its meeting next Thursday.

Click here to view the packet for Wednesday's meeting.