Rick Seeker’s campaign for Washington County Commissioner of Precinct One did not file the latest required campaign finance report within the proper deadline. 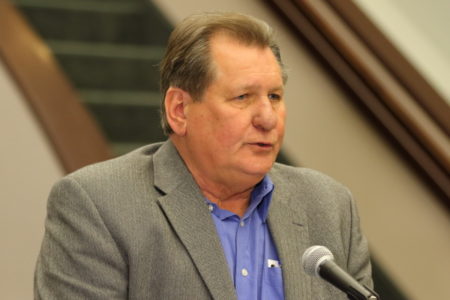 According to records in the office of County Clerk Beth Rothermel, Seeker did submit a report on January 14th ahead of the January 15th deadline, but did not file the report required by the 30-day prior-to-election deadline on February 3rd.  The report discloses any contributions received or expenditures made related to a candidate’s campaign, and how campaign funds are spent.

KWHI spoke with Seeker this (Friday) afternoon, who said his campaign “probably just didn’t know” about the deadline, and that the rules and regulations regarding the campaign are “all new to us”. He said they “just screwed up is all, plain and simple”, and confirmed his office did get the report in this afternoon.

Rothermel told KWHI that Seeker, whose campaign treasurer is Jerry Crews, was given a packet for proper reporting guidelines, and that he signed for the information on December 9th.  She added that, in the instruction guide given to candidates, they are informed that they, not their campaign treasurer, are responsible for filing a report.  Failing to file on time or filing an incomplete report may subject the candidate to criminal or civil penalties.

At Wednesday night’s Candidate’s Forum hosted by KWHI, candidates were asked if they filed all their political and financial reports required within a certain timeline. Each candidate responded in the affirmative.

Seeker’s report submitted today indicated that his campaign has spent $4,483 in expenses—excluding a $750 fee to file for candidacy—and received $2,750 in contributions.

The latest report of incumbent Don Koester, Seeker’s opponent in the Precinct One race, shows that Koester’s campaign has spent $1,970 and received $1,000 in contributions. Koester did not pay the $750 filing fee, as he got on the ballot by petition.

The next deadline for candidates to submit financial reports is February 24th, eight days before the election.  The reports, filed with the county clerk, become public record.  Reports are available for the public to view in the county clerk’s office, in a large notebook divided by each candidate’s name.