Artist Helena Martin works on her bird and flower mural on the side of the Home Sweet Farm building.
(courtesy Blake Hickerson, KTEX-106)

Crowds gathered in downtown for entertainment from a variety of performers, food trucks, beer tastings, and colorful displays of art.

Festival Founder and Board Chairman Brad Stufflebeam says this year, the festival saw its best turnout yet. 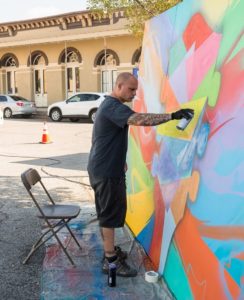 Meanwhile, SLOKEONE created two panels of art depicting the headstock of a guitar. One will potentially be used as a backdrop on the music stage in future festivals, while the other will be sold off.  Funds from the sale will be used to support the artist and the Texas Arts and Music Festival nonprofit organization.

Stufflebeam says there are already big plans underway for next year’s festival. 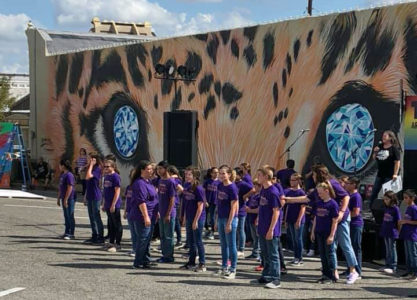