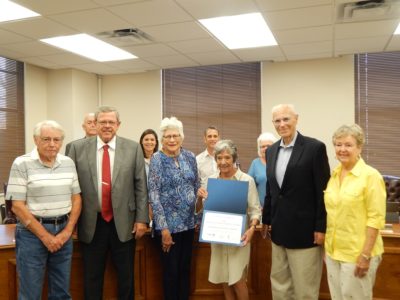 The commission was given the 2018 Texas Historical Commission’s Distinguished Service Award.  The award represents the local commission’s efforts in ongoing programs of history and preservation-related projects that enrich local communities.  WCHC Chairman John Barton said the Commission has received this award for the last 16 years.

As the Commission was presented the award, a moment of silence was given for the late Dr. Wilfred Dietrich, past chairman of the commission.

Commissioner Joy Fuchs said it was appropriate that the commission received the award today, shortly after the passing of Dr. Dietrich, who she said was “the glue” for the commission for so many years.  She added he was “a great contributor to our community”.

Commissioner Kirk Hanath said Dr. Dietrich loved this community and wanted the history of it preserved.  He said he will definitely have a legacy in Washington County, and will be remembered for a very long time for his work with and through the commission.

Commissioner Don Koester added it was an honor to serve with Dr. Dietrich in the short time he’s been here, and said he’s honored to be a member of the commission.