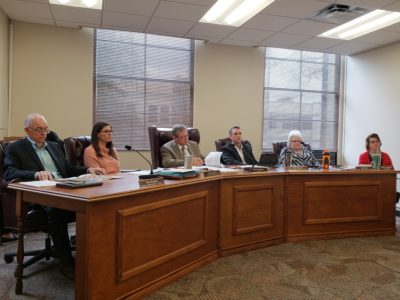 Consideration of a full-time court reporter position for the Washington County Court-at-Law was on the docket at today’s (Monday) County Commissioners meeting.

County Court-at-Law Judge Eric Berg stated that the county traditionally hires part-time reporters. However, he said the state is dealing with a shortage of court reporters, saying “we’re losing them faster than we’re replacing them”.  He added that schools statewide are simply not producing as many court reporters.

Judge Berg said not having a reporter severely handicaps the county court-at-law, as it requires the district court to shoulder more cases, such as those dealing with Child Protective Services. He also said the county cannot advertise for the position until commissioners approve creation of it.

Law requires the county to provide record and appoint a court reporter, and it falls upon county commissioners to fund the position. Judge Berg said the general salary for the position runs from $77,000 up to $90,000, but this particular request is for $80,000.

Commissioner Kirk Hanath said he wanted more depth added to the job description Judge Berg presented, saying its current wording was very vague on what a court reporter’s duties were. Judge Berg said court reporters have more obligations than just reporting, and he wants to keep their duties at the discretion of the county.  Hanath said he doesn’t want to keep any secrets from job candidates.

Also on the agenda, commissioners approved a new three-year agreement with the Chappell Hill Chamber of Commerce, for the exchange of EMS services. EMS Director Kevin Deramus stated the department has a “great working relationship” with the Chamber of Commerce, with County Judge John Durrenberger calling it a “great collaborative effort”.  Chamber President John Wick said he is very appreciative of the department’s efforts.

In Emergency Management Coordinator Bryan Ruemke’s monthly report, he announced the county’s hazard mitigation plan has been approved at the federal level. He said all that remains to be done is to approve the plan in commissioners court.