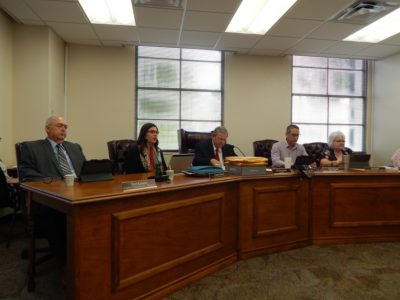 Commissioners first approved an AirMedCare Network municipal site membership for the county, which will provide air medical services for county residents in both Washington and contiguous counties.

EMS Director Kevin Deramus said AirMedCare Network is one of the largest air medical insurance companies in the country, and that this membership covers more than just the REACH Air Medical Services program.  He said, after taking a census count of 35,108 in the county and figuring in membership rates, the county will pay $3.77 per person for this subscription plan.  He stressed that taxpayers will not have to incur a cost at all.

Deramus said this agreement will also cover county residents in surrounding counties, so they would be covered in those counties should there be an instance of a county resident needing medical transport there.

Commissioner Kirk Hanath noted that 90 percent of air medical transport by Washington County EMS occurs in Washington County, and this was a means to ensure residents are covered for the 10 percent of the time they are outside the county.  He said helicopter service can be devastating financially to recipients, so the county is trying to do everything possible to offset those costs to taxpayers.  He said he feels that if residents were only covered when they are inside the county, those people needing services outside the county would feel the court did not do its due diligence to take care of them.

Commissioners also approved a preferred provider agreement between Washington County EMS and Baylor Scott and White.  The agreement, passed in conjunction with a City of Brenham ordinance, dictates that Washington County EMS will be the preferred care provider contacted for ground medical transportation.  Deramus said EMS has a “great partnership” with Baylor Scott and White, and this agreement will help keep rates low for EMS.

Also at Tuesday’s meeting, the court: