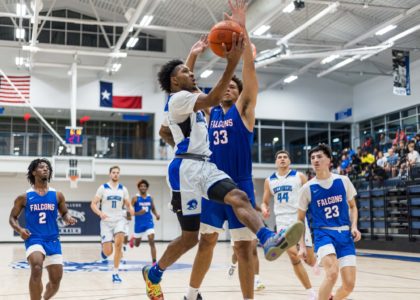 The Blinn College men's basketball team finished its run at the Wrangler Shootout with an 84-67 loss to No. 5 Odessa College on Sunday at the Odessa College Sports Center in Odessa, Texas.

The Buccaneers fell to 5-4 overall and finished 1-2 at the Shootout.

Blinn played the Wranglers close until the final minutes of the first half. The Buccaneers were within 30-27 with six minutes remaining before halftime, but Odessa went on a 14-4 run and led 44-31 at the break.

"We played a really good game at the beginning and were only down three late in the half, and then all of a sudden we're going into halftime down 13," Blinn head coach Scott Schumacher said. "We came out of halftime and just struggled to get things turned around. What it comes down to is we ran into a buzzsaw that is the fifth-ranked team in the nation."

Though the Bucs were unable to erase their deficit, they played the Wranglers more closely across the final 20 minutes of action, as Odessa outscored Blinn just 40-36.

Blinn did drain 11 of its 21 attempts from 3-point range, including six for Foster.

Though his team was unable to find victory in its matchups against No. 25 Midland College on Saturday and against Odessa, Schumacher believes the trip west will benefit his team in the long run as the start of Region XIV play is up next.

"I think our basketball team got better these last few days," said Schumacher. "It was a learning experience for our team before region games start, and we just have to continue to get better."