“Traditionally both the Lettermen and the Alumni & Friends associations have hosted golf tournaments to raise money,” said Dr. Kyle Merten, alumni relations director. “To change things up and add a more creative dynamic to our fundraisers, the two associations combined their efforts in the Clay Shootout.”

The inaugural Clay Shootout will be held at the Boswell Porter 4-H Shotgun Range located at 7676 County Rd 247 in Caldwell. Entry for a four-person team is $500, or $125 for a single shooter. Single shooters will be paired. There will be 10 a.m. and 1 p.m. flights, and the competition will be limited to the first 40 teams.

The shoot will include 50 sporting clays, including 25 trap and 25 skeet. There will also be two meals along with drinks, raffles, prizes and trophies.

Shooters must provide their own ammunition. Registration will be held one hour before shoot time, with a safety meeting 30 minutes before. Awards will be presented following the final flight.

No alcohol will be allowed during the shoot. Shooters under the age of 17 must have completed their hunter’s safety certification.

Blinn’s Alumni & Friends Association maintains contact with former students, encourages support for and participation in the College’s educational, cultural, athletic and social programs, encourages student recruitment and assists the College in achieving its goals and objectives.

The Buccaneer Alumni Lettermen Association maintains contact with all former Blinn athletes, coaches and athletic personnel, and encourages support for and participation in the College’s educational and athletic programs.

For more information, visit https://foundation.blinn.edu or contact Merten at 979-830-4495 or kyle.merten@blinn.edu. 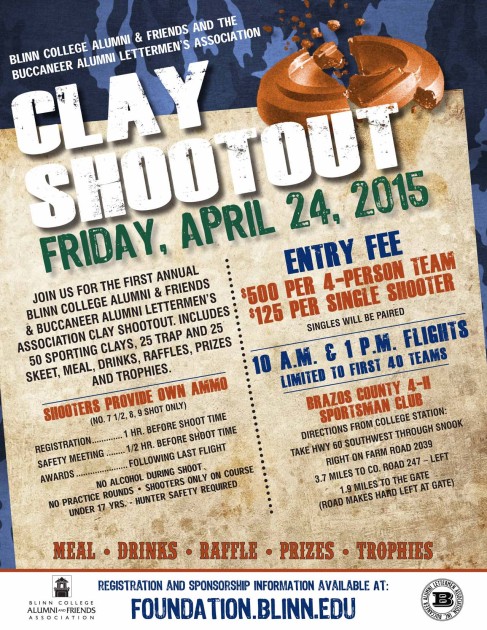