When the Dr. W.W. O’Donnell Performing Arts Center opened on the Blinn College-Brenham Campus in 2001, William Shakespeare’s “Macbeth” was one of the first productions staged there.

Now Theatre Arts Director Brad Nies, who has been with Blinn since 1990, is getting a second shot at the classic play.

“When the O’Donnell Center was completed, it was one of the first plays that we produced,” Nies said, “and it was a very good show, but I always wanted to redo it because it could have been a better show.”

Nies said his theatre arts students and support staff are “pulling out all the stops.”

“We have some really cool special effects,” he said. “We’ve got witches that appear and disappear. It’s going to be very exciting.

“The actors are playing the characters realistically. It’s very easy to present Shakespeare in a ‘presentational’ way,” he said. “We’re going natural and very realistic, so the audience can feel for the characters and what they’re going through.”

Nies said the play asks much from the students on the stage and behind the scenes. 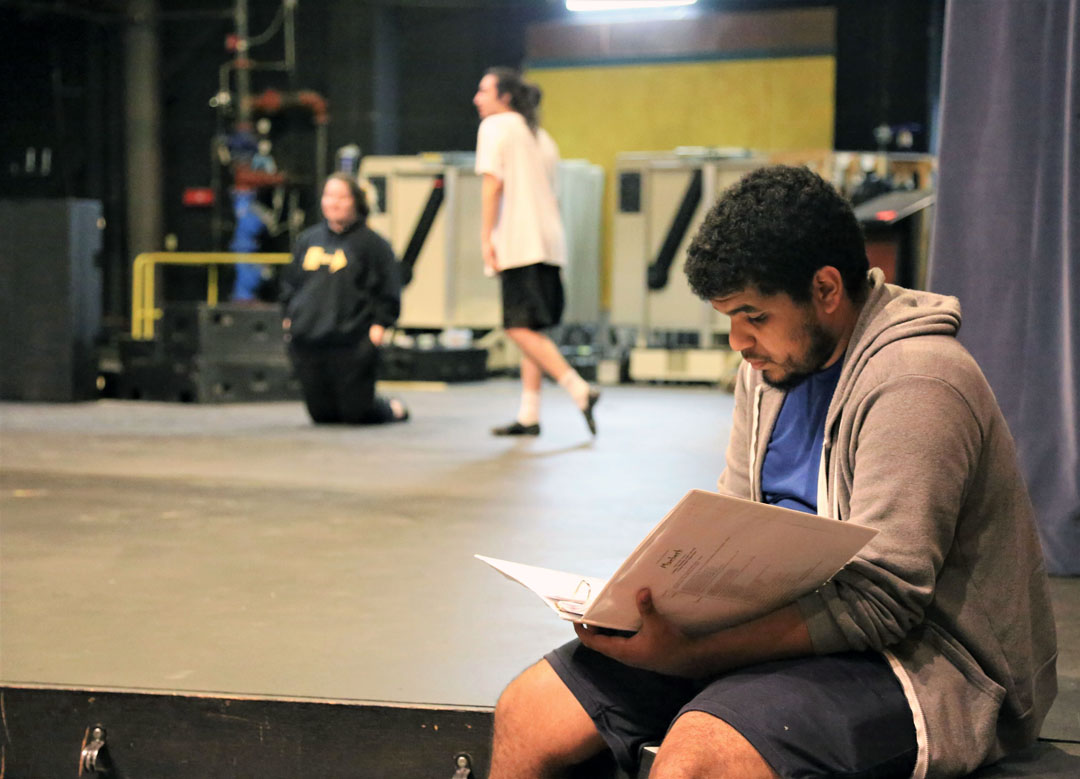 “The language may serve as a barrier because you can end up not quite grasping it unless the actors are putting the feeling and emotion behind it so you can understand what’s going on,” he said. “Just from the way they’re saying things and their attitudes, you can get the idea and can follow along with the story.

“If not, it’s just reciting. Then it can be a language barrier. But that’s one thing we’re really working on with our students, is for them to be natural and realistic so we can see what the characters are going through.

“We couldn’t do it without our technical people. We could not do it without the students in our program. They are the ones who have put in the extra hours. They’ve put the blood, the sweat, and the tears into it, and as a result it’s going to be a great show.”

Nicole Pinter, who plays Lady Macbeth, said that role “is one of Shakespeare’s most complex female characters.” When he wrote the play in the early 1600s, women’s roles were traditionally played by men, which Pinter said made getting a grasp on the character more challenging.

“It’s been very interesting, very difficult,” she said. “I’ve had a lot of trouble finding out who she is, what her motives are, but I think it’s coming together really well.”

Pinter said the production is “a little bit of a different take” from how “Macbeth” traditionally is staged.

“Shakespeare is normally very presentational. We’re doing it more like these people are human, they have human feelings,” she said. “We want these people to be very relatable.”

Tanner Pieper, who plays the lead role of Macbeth, said seeing it performed on stage is very different from just reading the play.

“A lot of people read it, but they may never see it performed. To see it performed is half the understanding of it,” said Pieper. “We’ve tried hard to be able to connect with the audience.”

Pinter said the fact that the play is Blinn’s entry in the TCCSTA Play Festival does bring added pressure.

“But I have faith in this cast and the show’s production quality,” she said. “It’s going to be great. Everybody always pulls together and does everything they can to make the best show possible.”

Tickets are $10 for adults and $5 for students, children, and senior citizens. They are available at www.blinn.edu/boxoffice or by calling 979-830-4024.  Story and photos courtesy of Blinn College.