The Mayor of Burton is frustrated with the state of roads in the city, and upset at the Washington County Road and Bridge Department’s seeming inability to help. 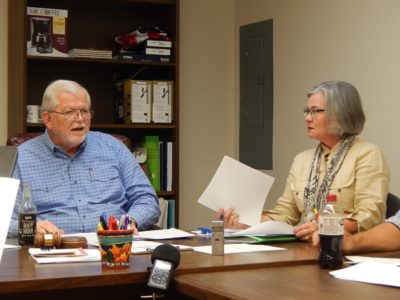 During Tuesday’s Burton City Council meeting, Mayor David Zajicek said the city has been in “constant contact” with the Road and Bridge Department, in order to have work done on some of the city’s streets.

Zajicek said he has been told the department is short on staff and working other county roads, and will not be able to help the city in the near future, which he called “very disconcerting”.

Zajicek said the city may have to look elsewhere to get roads worked on, as they are becoming dangerous to drive on.

In a statement Thursday from County Road and Bridge Engineer Ross McCall, he said county commissioners must approve an interlocal agreement with the city in order to allocate resources within city limits. He said the county is currently negotiating an agreement for work within the city.

McCall added the county’s “immediate priority and responsibility” is to address damage to county roads and infrastructure, due to oil and gas activity. He said those concerns not only affect Burton citizens, but all residents of Washington County.

Road conditions have been a stated focus of Zajicek for several months. Back at June’s city council meeting, he announced he had met with McCall and Precinct Four County Commissioner Joy Fuchs, regarding some of the city’s issues with roads.

It is my responsibility to be a good steward of the county’s road funds, time and road infrastructure.  While we continue to look for ways to partner with neighboring municipalities and counties, it is my immediate priority and responsibility to address damage to county road infrastructure due to oil and gas activity.  Addressing these concerns not only affect the citizens of Burton, but all of the residents in Washington County.    Reason dictates that we need to focus on these major issues first.

I look forward to continuing partnerships with neighboring local governments provided that the Commissioner’s Court approves an agreement and the conditions of the work are in compliance with the State Transportation Code.