The City of Brenham is eyeing several locations for the potential addition of a splashpad. 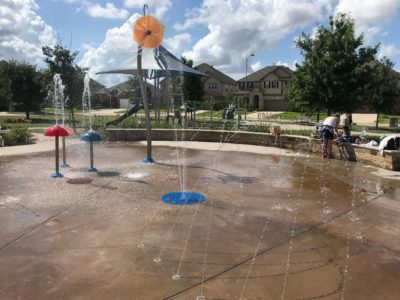 A completed splashpad in the Katy area.
(courtesy City of Brenham)

The topic was discussed by Brenham Parks and Recreation Advisory Board members at their meeting Wednesday.

City staff have identified two locations as suitable for a splashpad: Fireman’s Park and Henderson Park. At the meeting, the board discussed the pros and cons of having a splashpad at either location.

Public Works Director Dane Rau said he and other city staff have taken trips to over ten splashpad locations, like Universal City, Georgetown, Katy, and Cypress, to see what works and doesn’t work at those places.

During the 2019-20 funding request from the Brenham Community Development Corporation (BCDC), $300,000 was awarded for the addition of a splashpad in a city park. This was also part of the park’s master plan and was earmarked for 2020.  With the city’s budget, it is looking at around a 2,000 square foot splashpad with a total area of around 2,800 square feet, including a five-foot buffer around the pad.

Some suggestions for a splashpad location in Brenham.
(courtesy City of Brenham)

According to Rau, the benefits of having the splashpad at Fireman’s Park instead of Henderson Park include the existing infrastructure in place at Fireman’s Park. The location has a covered pavilion, ADA sidewalk, a two-inch water line in the area, and new restrooms in the area.  The site also sits on flat ground.  However, there are also issues with a relatively small parking lot for the park’s many uses, and sewer has not truly been identified.

For Henderson Park, the city appreciates the site’s abundance of parking off North Park Street, and its proximity to water and sanitary sewer. However, restrooms are not particularly close, there is not a covered pavilion, and the property has more of a natural slope which would require dirt work to be done.

Rau said, even if Fireman’s Park is chosen over Henderson Park, over $900,000 is being put into Henderson Park over the next two years through its improvement plan. He added that phase two of improvements will open for bid on August 22nd, and amenities will be added to the park as part of the improvements.

Rau said the city is hoping to start construction on a splashpad late this fall or early next year, so it can be ready for next summer.

The topic was only discussed in work session, so no action was taken.

Click here to view the packet for Wednesday's meeting.