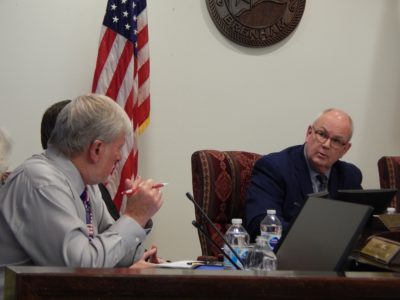 City Manager James Fisher (right) explains details of an agreement in the works with Brannon Industrial Group (BIG) to Brenham City Councilmember Keith Herring. No action on the agreement was taken at Thursday's meeting.

When it came time for a vote, however, none was taken. City Manager James Fisher informed councilmembers that no action would be required from them at this meeting, as the general and commercial sanitation agreements were not yet fully prepared.  He said the final drafts of those agreements would come before them at their next meeting on March 5th.

Fisher explained to those in attendance that this decision to outsource dated back to conversations held in early budget workshops last year. He said the city did consider keeping operations internal, but after extensive research, it was determined that the most cost-effective method would be the outsourcing route.

Public Works Director Dane Rau explained cities like Bellville and Caldwell have already made moves similar to what Brenham is currently considering. He added the city’s current sanitation practices are no longer sustainable, at least not without major cost increases for both the city and its customers.

Both Fisher and Rau stressed that keeping rates fair for residents and businesses is a priority of theirs, and said provisions to protect against rate increases are being considered. 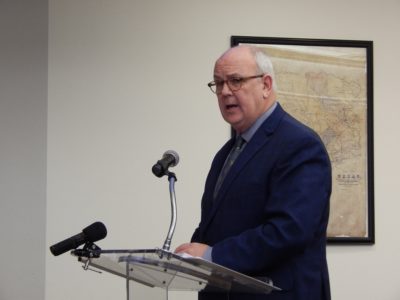 Several city and county residents came forward and addressed city officials with their worries, including county resident Diane Hodde, who said she is concerned about the possible closing of the city’s Recycling Center on Market Street. Hodde, who lives in the Salem area, said she uses it two to three times per week, and that it would be inconvenient for her to travel to the city’s collection/transfer station on Old Chappell Hill Road.

Another citizen said he could not understand how the city would be losing $200,000 per year to the general fund without the operation of the sanitation department. Fisher explained that between $350,000 and $360,000 was transferred from the sanitation fund into the general fund each year, and that would go away.  Since BIG has its own internal administrative departments such as human resources and information technology, it would not need to use the city’s administrative departments, which the city’s sanitation department utilized.

Dave Hall asked how the cost of resident trash collection could go up, yet trash pickup services would decrease from twice a week to once a week. Fisher answered that if the city were to continue doing it just the way they are now, the rates would go up, and there would be no curbside recycling. 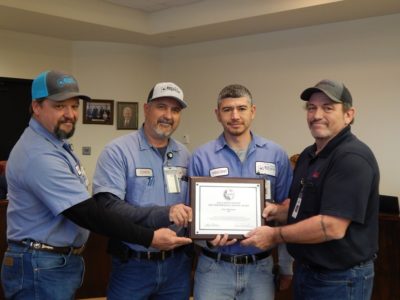 City of Brenham Gas Superintendent Ande Bostain (right) and fellow members of the gas department are recognized for receiving a 100 percent rating for the city's gas utility system.

A new resident to the city said he does not think this decision is a good idea, and is worried about keeping the city clean. Meanwhile, a resident of the Atlow addition said the new containers will not fit in her garage, and she has no room outside to store them, adding that they are not very pretty to look at.  She said she wants to see the numbers on how this is a good idea for the city.

BIG President Blake Brannon said he completely understands this change may be difficult for residents, but reassured that since they are a local company, Brenham is their city too, and they take great pride in it.