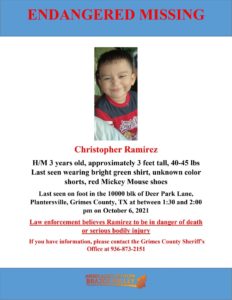 A toddler in Grimes County remains missing after several days of searching by local, state and federal agencies.

Investigators continue to look for 3-year-old Christopher Ramirez, who was last seen Wednesday afternoon at his family’s home in the 10000 block of Deer Park Lane in Plantersville.

On Friday, Grimes County Sheriff Don Sowell said the search area would be slightly expanded beyond the area of the subdivision.  He also confirmed that Christopher’s immediate and extended family members have been excluded as any persons of interest.

Sowell said authorities received a tip on Friday that a child with the same name and age was seen with a man and woman in Brewster County, near the U.S.-Mexico border.  However, it was determined that the child was not the same Christopher.

Christopher’s mother, Araceli Nunez, said he disappeared after following a dog into the woods while she and her family were unloading a van in their driveway.

The child is approximately 3 feet tall and weighs between 40 and 45 pounds.  He was last seen wearing a bright green shirt, unknown color shorts and red Mickey Mouse shoes.

Sowell said no additional volunteers are needed to help search at this time.

Anyone with information is urged to contact the Grimes County Sheriff’s Office at 936-873-2151.