The Brenham City Council took a look at several tracts of land being considered for annexation at its meeting today (Thursday). 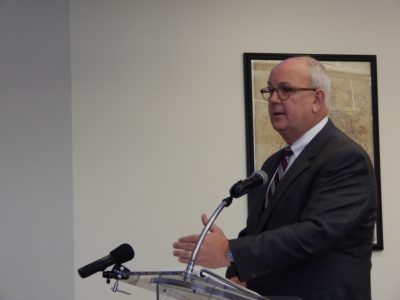 The council met in work session to discuss the areas under consideration. Back in May, the council passed a resolution directing the city manager to prepare service plans and review land tracts within the city’s service area for utilities.

The land being considered would expand the city’s boundaries by just over 27 percent. That percentage does not include properties that have requested annexation.

City Manager James Fisher said the land under consideration is located to the north, northeast, northwest, southeast, and southwest of current city limits.

Fisher said the city would start with that land initially. He noted, as TxDOT continues to look at its plans to improve the Highway 290 cloverleaf, the properties there could be impacted the greatest.  He said the city wants to be involved in how future development occurs in that area.

Several tracts being considered are currently appraised with an agricultural exemption, which would require the city to offer those property owners development agreements. The agreement guarantees the continuation of extraterritorial jurisdiction (ETJ) status for a period not to pass 45 years.  The city would offer these agreements with a time period of ten years.

Also in session, the council approved changes in the rate tariff schedule for the cost of water services. Last year, the city hired NewGen Strategies and Solutions, LLC to update the city’s water rate model and recommend water rate changes.

The company’s recommendation was a 4 percent increase to the water rate, which will bring the average monthly residential water bill—based on 5,000 consumption gallons—to $25.78, a 99 cent increase.

The city had not increased its water rates since 2008. Assistant City Manager of Public Utilities Lowell Ogle said it’s “pretty good” the city made it 11 years without an increase.  He noted that the city uses surface water, which he said is more expensive to pump and treat than groundwater.