The Burton School Board voted to extend the contract of Superintendent Dr. Edna Kennedy at its meeting Monday. 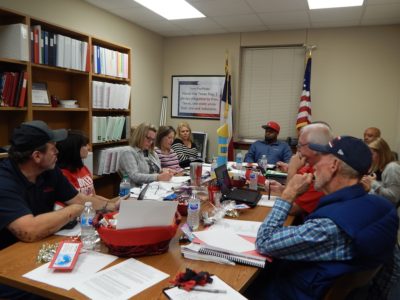 After meeting in executive session, the board voted 5-2 to extend Dr. Kennedy’s contract two years, through June 30, 2023. Trustees Felton Cox and Tracey Cox voted against.

During regular session Monday, the board approved an order calling for a school board election on May 2nd.  The positions up for election are currently held by Ande Bostain, Felton Cox, and Misty Lucherk.  The board also appointed early voting and Election Day clerks, and approved a joint election contract with the City of Burton.

Also in session, the board discussed options for the employment of a school nurse. Dr. Kennedy said the board is waiting on word back from the Texas Association of School Boards, who has performed a survey on schools around the state that do or do not have school nurses.  However, the district found through calling area school districts that Somerville, Dime Box, Round Top-Carmine, Snook, and Fayetteville ISDs all have either a registered nurse (RN) or licensed vocational nurse (LVN).

Dr. Kennedy said the district does have an athletic trainer that could be available to implement in a health advisory role a few times a week. She added that all staff have gone through health trainings and have certifications. She said there are legal matters to look into before pursuing an RN or LVN.

Lucherk said she would like to see a log to take a count of how many students come in to the office for health-related issues. She said she does not believe the district can justify “paying somebody $50,000 a year to hand out medicine” if the district already has someone to do that.

The board tabled the motion in order to get more information on the matter.

The board also approved a probationary contract for 4th grade ELA and social studies teacher Deanna Maye Butler.  The contract will give Butler full teacher pay instead of long-term substitute pay.

The board also approved 2018-19 audit reports for the school district and the Washington County Appraisal District.  It also heard reports from the superintendent, athletic director, and elementary and high school principals.