Several Brenham representatives met this (Thursday) morning to plan for and discuss the city’s future.

Members of Brenham City Council, Planning and Zoning Commission, and Board of Adjustment spoke with officials from Kendig Keast Collaborative (KKC), to begin updating the city’s comprehensive plan. The city approved an agreement with the planning consultant based out of Sugarland in September. 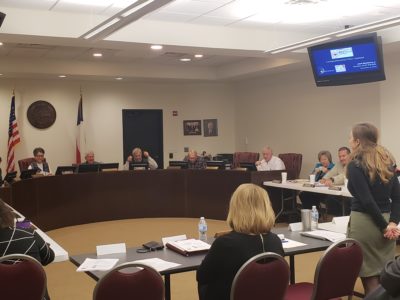 Gary Mitchell and Meredith Dang, respective President and Senior Associate of KKC, addressed the group, asking them what their priorities are for the city moving forward.

The two stated this meeting would serve to establish a big picture, and the context for the plan.  Future meetings, which are planned through early to mid-2019, will work on the smaller details.

Through the meeting, the group spent time talking about how Brenham has both changed and stayed the same over the years. They also discussed how it has improved, what needs improvement, and some of the top strategic goals of the city.

The city also discussed some of its strengths. Several members spoke of Brenham’s improvements in tourism, a sense of belonging in the community, stability of government, and frequent involvement of the public in community events.  In addition, they mentioned the building of several new facilities over recent years, such as the Nancy Carol Roberts Memorial Library and animal shelter.

The group also spoke on some of the city’s goals that it felt have not been reached. These included the lack of downtown hotels and an inability to retain younger citizens in Brenham.  Some members stated that people would be born and raised in Brenham, would then leave for places like Houston for higher-paying jobs, then come back to Brenham to retire.  They said the city needs to work to shed its appearance of a “retirement-town”. 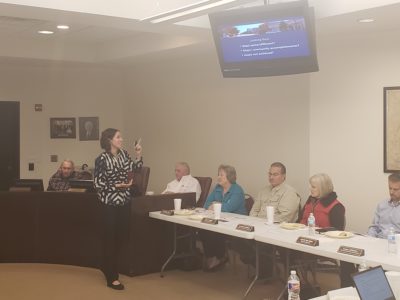 A majority of the group present said the city’s top priority should be maintaining the “small-town feel” of Brenham, while also allowing for retail and industrial expansion.

Other topics mentioned included managing commuter traffic, the further development of schools, exploring other energy options, and maintaining smart growth by planning for situations rather than reacting to them.

City Manager James Fisher said he was excited to hear all of the discussion. He also stated that the group needed to make sure it was on the same page when talking about “small-town feel”, as he felt that point could often be subjective.

Assistant Development Services Director Stephanie Doland said this meeting is one of the first steps in a process expected to take 9-12 months.

Setting a timeline, Dang said this month through February would act as the early input stage, outlining a plan direction and receiving input from citizens in town hall meetings.