The Brenham City Council approved the creation of a reinvestment zone for a local company at its meeting today (Thursday). 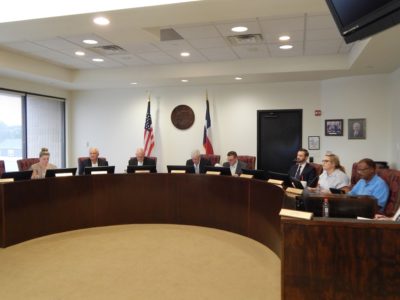 The zone will provide commercial tax phase-in incentives for QuestSpecialty Corporation, which manufactures industrial chemical products sold through distributors who then resell under private labels to plants, hospitals, schools and other institutional users.

Brenham Economic Development Director Susan Cates said the company currently has 159 employees in Brenham and is looking to add more as it expands production.

According to the agenda packet, the company is purchasing $750,000 in new equipment to expand its current capacity, and expects an additional $500,000 in inventory will be required to support this increased capacity.  The expansion will have an estimated impact of $1.69 million in additional salaries.

Also at today’s meeting, the council formally proposed a tax rate of $0.4940 per $100 valuation.  Chief Financial Officer Carolyn Miller explained that the new rate, which is one cent cheaper than last year’s rate, includes changes to the maintenance and operations (M&O) and debt service (I&S) portions of the rate.

The new rate will be considered for adoption at the council’s meetings on September 2nd and 16th.

One item that was set to be considered during today’s meeting but was postponed was the second reading of the Historic Preservation Ordinance.

The second reading included revisions that would allow downtown historic district property owners to vote on two of the property owner positions appointed by the city council to the Historic Preservation Board.  It also clarified that the guidelines and standards adopted by the ordinance for approval of a Certificate of Appropriateness shall not apply to building and structure interiors.  It also added a section that requires the ordinance be reviewed within five years for recommended revisions.

However, Leah Cook, who was one of four councilmembers who voted to adopt the ordinance on July 15th, was not present at today’s meeting.  This would have left only three on the council able to vote on the item, as Mayor Milton Tate and Councilmembers Clint Kolby and Shannan Canales abstained from the vote in July, due to either ownership interest or being employed by a business in downtown.

The second reading of the ordinance will now take place at the council’s meeting on Thursday, August 19th.

The council also met in executive session to consult with the city attorney regarding pending litigation.  No action was taken, but the council discussed the following: