The Brenham City Council has formally adopted a Historic Preservation Ordinance for the city’s downtown area and local landmarks. 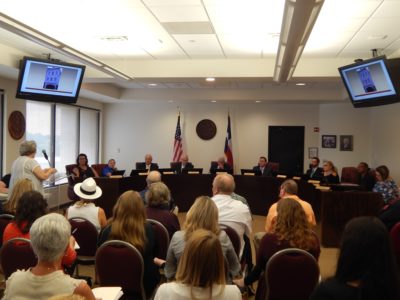 At a standing-room-only meeting today (Thursday), the council voted 4-0 to enact the ordinance, which will institute a city approval process for certain alterations to downtown building exteriors.  Mayor Milton Tate abstained from the vote, along with Councilmembers Clint Kolby and Shannan Canales, due to either ownership interest or being employed by a business in downtown.

Around 30 people spoke during a public hearing for the item.  Most of the people were in favor of the ordinance, like Jane Barnhill, an investor in downtown and former member of the Texas Historical Commission, who said downtown Brenham should be protected and treasured.

Others, like Ant Street Inn co-owner Keith Hankins, questioned the need for an ordinance, saying downtown was able to become what it is today without one.

Downtown property owner Tom Bartley was also in opposition, saying while the ordinance is well-intentioned, he believes this debate of protecting downtown is ultimately one that is philosophical in nature.

Local resident Mary Thornhill, who started the process of establishing a historic preservation ordinance in Brenham after researching other cities with preservation methods, said there would be one person in particular that would ask the council to pass this measure: the late owner of Hermann Furniture, John Hermann.

A Historic Preservation Office consisting of Main Street staff will be responsible for issuing Certificates of Appropriateness (COA) for alterations not considered to be ordinary repairs and enforcing the guidelines of the ordinance.  Currently, the office would consist of Tourism and Marketing Director Jennifer Eckermann and Main Street Coordinator Kathrine Briscoe, who will train through the Texas Historical Commission and National Association of Preservation Commissioners to serve as Historic Preservation Officers.

The passing of the ordinance leads to the creation of a Downtown Overlay District, covering 49.4 acres.  Additional historic districts and local landmarks may be designated upon request by property owners and upon review by a Historic Preservation Board.  The board will be made up of seven people appointed by the Brenham City Council; at least four members must be property owners within the historic district or an owner of a historic landmark.  Board members may serve two terms before needing to take off a year.

COAs will not be needed for ordinary repairs such as replacing mechanical equipment, repainting a surface using the same color and repairing architectural features using the same materials.  They will be needed for insignificant alterations like changes to paint colors, replacing non-historic features with ones keeping with the era of the building, and modifications to an existing COA.  The Historic Preservation Board will consider significant alterations, which include work that requires a building permit, new construction added to existing building features, changes that alter the design or character of a building, and moving or demolishing a building or landmark visible from the public right-of-way.  The ordinance is only intended to maintain building exteriors, not interiors.