Brenham City Councilmembers have moved forward with a road improvement project that will go hand in hand with a shopping center project. 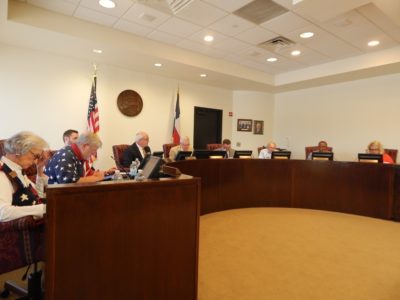 The council at their meeting today (Thursday) approved an agreement with Lee Engineering to provide services for the feeder road project for South Chappell Hill Street at Highway 290.

Services to be provided by Lee Engineering will include preparation of design plans and submittals, specifications, project management, surveying, cost estimate data, and helping the city with various parts of the bidding process.

The proposed improvements include a traffic signal that controls traffic at the intersection of both the east and westbound feeder roads, as well as the widening of the existing pavement under the Highway 290 bridge to accommodate left-turn bays.

Assistant City Manager Lowell Ogle said this project will serve a much larger purpose than just the shopping center development project off Highway 290. He also said the Texas Department of Transportation (TxDOT) has identified these improvements in a traffic impact analysis report, and has been “agreeable” with them so far.

Ogle said the city will be responsible for engineering service costs, which will not exceed $82,000.

City Manager James Fisher said Lee Engineering was chosen because he has worked with the firm in the past, commenting on their good track record with TxDOT and “expertise” in traffic engineering.

The council approved the motion, contingent on Ogle and City Attorney Carey Bovey working on the final agreement. It has not been determined when construction on the project will start.

The council also addressed several items behind closed doors. Executive session discussion included the lease agreement between the city and Washington County for the 911 dispatch center at 301 North Baylor Street.  The council agreed to extend the lease with the county for two more years.  The county has been renting the facility ever since it took over dispatching duties from the city several years ago.

The council also approved the purchase of security devices for the Brenham Police Department using seized narcotics funds.  As discussion on the item took place in executive session, no information was given as to what devices were purchased.