The City of Brenham is looking for volunteers to serve on some of its 11 advisory boards. 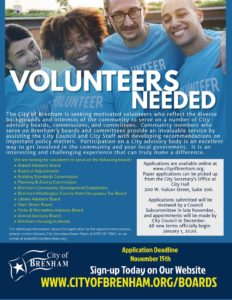 Board members provide an opportunity for citizens looking to make a difference in the community and solve problems.  City officials say the most effective way for citizens to become directly involved in government is to volunteer their time to serve on an advisory board.

Advisory boards are not legislative bodies, and the extent of their authority is dependent on city ordinance and/or state statutes.

Applications are available online at www.cityofbrenham.org/boards, or at the city secretary’s office at Brenham City Hall.

Applications submitted will be reviewed by a council sub-committee in late November, and appointments will be made by city councilmembers in December.  All new terms officially begin January 1, 2020.