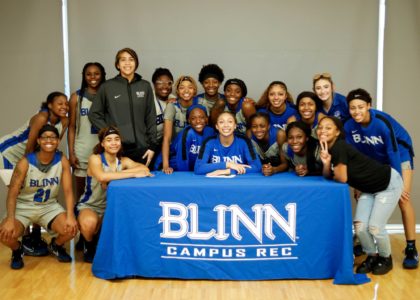 Chynell Mitchell had two reasons to celebrate on Saturday.

After the Blinn College women’s basketball team defeated Ranger 88-65 at the Kruse Center in Brenham, Mitchell – a redshirt freshman forward from Bowie High School in Austin – kept the party going when she made her commitment to Alabama A&M University official.

During a signing ceremony at the Kruse Center, Mitchell inked her letter of intent to play for the Division I Lady Bulldogs alongside her friends, family, teammates, and coaches.

“It means a lot to me to sign and go Division I, but also to have my team and my coaches here to encourage me and make me stronger and get me to where I need to be,” Mitchell said. “They push me in practice and that’s how I got to this level.”

Mitchell, a second-year Buccaneer, will attend Alabama A&M – located in Normal, Ala. – in fall 2022. She will major in English while working toward her goal of playing professional basketball.

“After Alabama A&M, I’m hoping to go to the WNBA,” she said, “but if that does not work out, then I want to return to my old high school to be an English teacher and coach basketball.”

Blinn head coach Jeff Jenkins raved about Mitchell’s ability and willingness to take on the toughest jobs on the court, which often involve guarding opponents’ tallest players on the court.

“Chynell has good size and great length, but what makes her special is her work ethic; she plays hard every single possession, she battles everyone and she’s never intimidated,” Jenkins said. “Plus, her upside is huge. She’s going to get so much better offensively.

“I think her next three years at Alabama A&M, as her offense catches up with her defense and her work ethic, they’re going to be getting a really special player and person.”

Blinn has competed in intercollegiate athletics since 1903 and captured 42 NJCAA national championships since 1987. For more information, visit www.buccaneersports.com.