The Burton School Board set the proposed tax rate and discussed employee pay raises at its meeting Monday. 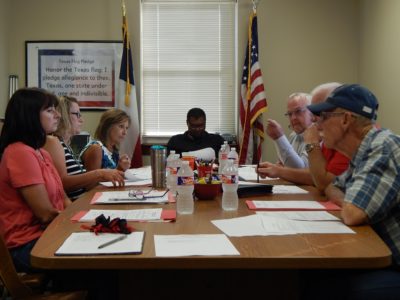 Superintendent Dr. Edna Kennedy said the M&O rate decrease was one mandated by the state with House Bill 3 in the past legislative session. She said the I&S rate was lowered due to higher property values.

Washington County Chief Appraiser Willy Dilworth presented the average value of a homestead in Burton compared to last year, which he said has increased roughly 10 percent. The average market value of a residence last year was $168,942, compared to this year at $185,278.  Dilworth said, if a taxpayer’s home sits at average value, that person’s taxes will go down roughly $9.50.

Dilworth said one thing to note in the rise in property values is the increase in mineral values, which have gone up about $220 million from last year. He said he does not expect to see that kind of increase in value in the future.

The board also went over staff pay raises, which were not finalized at Monday’s meeting. Dr. Kennedy said, as per House Bill 3, 30 percent of the total gain for average daily attendance was to go to teacher salary increases in every district.  That value came out to $142,000 for Burton ISD, which is planning to take 75 percent of that to give to teachers and 25 percent for other staff.

The district’s compensation plan calls for a bigger pay raise for medium and higher level teachers than younger teachers. For example, projected numbers show a new teacher in the district would receive $39,000 salary this year, a $1,000 raise over last year.  Meanwhile, a teacher with 25 years’ experience would receive $57,130, a raise of $3,420.

However, board members were undecided on how to approach raises for other district staff, including para-professionals, maintenance, and bus drivers.

With roughly $35,000 available for raises for 25 employees in this category, the district initially presented a blanket $1,400 raise for each employee. Some board members argued this raise would not be fair to new teachers.  They also said there would be staff working a small amount of hours per week and getting the same raise as staff with longer work weeks.

The board decided to move forward with the teacher pay raise numbers, but hold off on approving the raises for other staff until it could figure out a step system to award more experienced personnel.

The board will further discuss the budget and tax rate next Monday at 5:30 p.m., in the Burton ISD Administration Office.