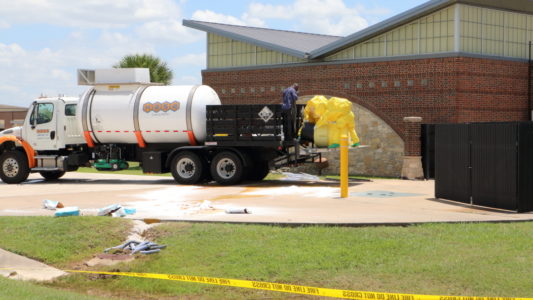 Friday proved to be a busy day for the Brenham Fire Department.

In addition to the chemical spill at the Blue Bell Aquatic Center just before 1 p.m., where a 55 gallon barrel of muriatic acid leaked onto the parking area in the back of the facility, firefighters were also dispatched to several vehicle accidents.

Shortly before 3 p.m., first responders were called to the 2700 block of Wood Ridge Boulevard to an accident on the feeder road in front of Chili’s.  Units arrived and found a vehicle up against at the guardrail with two people still inside.  Firefighters helped Washington County EMS with removal of the victims.  Traffic was blocked on the feeder road for about 15 minutes.

Firefighters were later called out around 7:15 p.m. to the 4000 block of Highway 36 South, by the Brenham State Supported Living Center, to an accident with entrapment.  When they arrived, they freed one patient from the vehicle at the scene using extrication equipment.  Units also assisted with traffic control and patient packaging.

The conditions of the accident victims were not made available.  No one was injured in the chemical spill incident.