The agreement will provide a number of leased vehicles to local agencies. 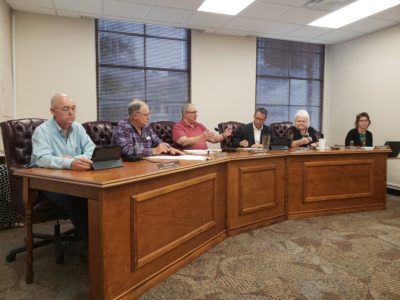 County Judge John Brieden said the first year of this agreement will provide 36 vehicles for the county – 17 of which will go to the Washington County Sheriff’s Office, 14 for county Road and Bridge, and five for environmental and emergency management.

Brieden said this is something county commissioners have been researching and discussing for months, and it is also something they’re very excited about moving forward.

The agreement was already accounted for in prior budget discussions.

Brieden also said not every county vehicle will be worked into the new agreement immediately, but rather, they will be incorporated over time.  He mentioned that roughly a third of the county’s existing vehicles will be implemented into the new system in the first year.

Commission Joy Fuchs noted that one of the major parts of the agreement was fleet management and repair services.  She said, in her talks with other county officials that use this system, that they all had positive experiences with it.

Enterprise representative Mark Block added that commissioners will not be held to a time commitment with the agreement, and the company is excited to build a long-term relationship with the local departments of Washington County.

Commissioners also agreed on the future submission of an application that could bring in more disaster recovery funds for the flooding of 2016.

According to Brieden, the federal Housing and Urban Development’s (HUD) block grant disaster recovery program could give up to $2 million to the county in aid, to be used for repairs to county roads and infrastructure.  Brieden expects the county to receive about four infrastructure grants and eight housing grants.

GrantWorks, a service provider recently hired by the county, will collect 3 percent on any funding the county receives, for its work in helping the county acquire grants. GrantWorks is still in the application process.

Several items had to be approved in order to receive the federal funding from the program, being administered by the Texas General Land Office.

Brieden stated that HUD required the adoption of a citizen participation plan, an excessive force policy, and a procurement policy.

He added that the county has these policies already, but the ones in place didn’t meet federal requirements in order to apply for grant funding.

In other items, commissioners renewed a five year inter-local agreement with Groundwater Management District 14, as well as a five-year non-financial agreement with the Texas Department of Family and Protective Services.