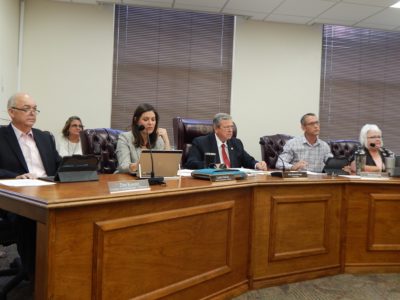 The court proposed a rate of 49.5 cents per $100 valuation, two cents below last year’s rate of 51.7 cents per $100. However, despite the lower rate, the county is expecting to see an additional $2 million in tax revenue—nearly a 12 percent increase over last year’s budget—due to higher property valuations.

Washington County Chief Appraiser Willy Dilworth said the increase was mostly due to higher mineral values, which he said are valued for the county at $287 million. He estimated the new minerals should lead to an extra $1.3 million in tax revenue, which is included in the overall $2 million previously mentioned.

New construction and taxable value amounted to $66 million, and is expected to yield an additional $327,000. Meanwhile, increases from revaluation of the existing tax base total $150 million, or 5.2 percent more, with taxes estimated at $345,000.

Commissioner Kirk Hanath said there is a “shell game” being played by state politicians that try to vilify appraisers and local governments. He added that constituents seem to be getting completely different messages from local governments and state legislature.  He said the finger-pointing needs to stop, and the problems need to be fixed.  Dilworth said the county is not blaming the state or any entity, but merely applying the state’s rules and doing what the state wants the county to do.

Public hearings on the new rate are set for September 3rd at 9 a.m. and September 9th at 5:15 p.m., both in the Washington County Courthouse Chambers.

Also in session, commissioners approved an amendment to the county’s economic development agreement with Baker Katz, for its planned shopping center on Highway 290 and Chappell Hill Street.

The amendment says complete construction of the building to be occupied by the first tenant in the project will happen no later than July 1, 2021. The agreement originally called for the first tenant by January 2021.  City of Brenham Economic Development Director Susan Cates said the change will allow the developer added flexibility.

The amendment also says the city’s design and construction of Chappell Hill Road widening improvements will now be dependent on the results of a traffic analysis report being performed by the city. Officials are currently planning for the road improvements to take place from the Highway 290 eastbound service road to the southern line of the Baker Katz property.