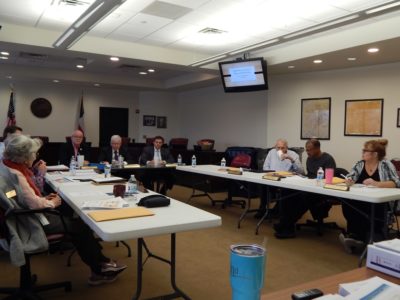 City of Brenham officials dug deeper today (Thursday) into the details of a prospective agreement between the city and Brannon Industrial Group (BIG) to outsource sanitation operations.

Brenham City Councilmembers met with officials from both the city and BIG in workshop session to further explain some of the inner workings of the agreement, which calls for BIG to take over the city’s municipal solid waste collection, disposal, and recycling services.

Topics covered at the workshop included the new rates residents and commercial businesses can expect for curbside trash pickup and recycling, operation of the collection/transfer station, and costs the city will need to work through as part of this transition.

Public Works Director Dane Rau said the city is moving in this direction as it can no longer maintain operations the way they are currently running. 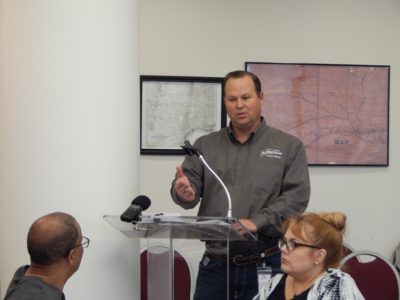 The new rates cover once-per-week curbside trash pickup with a 96-gallon cart—or 65-gallon cart for disabled or senior citizens—and curbside recycling pickup once every two weeks. Citizens will need to put their trash inside regular trash bags, which will then go inside the carts.  There will also be a new $15 charge for any call-in brush pickup, per occurrence.

Rau noted that for residential recycling pickup, glass will not be accepted in the curbside carts, as when the glass is compacted, it damages the rubber gaskets in the recycling trucks and affects other recyclable materials. Glass recycling will still be accepted at the collection/transfer station for a fee.

Regulations will be put into place to prevent homeowners from leaving their trash bins out all days of the week. If someone’s cart is stolen or damaged, BIG will be responsible for replacing it.  There will also be a cart assistance program for elderly or disabled residents who may be unable to move their carts.

For commercial customers, Rau said they can expect about a 7 percent increase for commercial solid waste costs, but the rate should still be comparable to other cities. Costs for once-a-week pickup—using either two, four, six, or eight-yard dumpsters—range from $70 per month to $114 per month.  For recycling, an eight-yard dumpster will be provided, along with once-a-week pickup.  Recycling costs will be factored separately from trash pickup.

Hours at the collection/transfer station will remain the same: 8 a.m. to 5 p.m. Mondays through Fridays, and 8 a.m. to 4 p.m. on Saturdays. BIG will be responsible for the payment of all utility bills for the facility, as well as the billing of users for any services provided there.  There will also be recycling drop-off stations provided at the facility for Washington County residents and local businesses, for a proposed annual fee of $45, the same as city residents.

City Manager James Fisher stated the city should expect an 18-month transition period as each facet of sanitation services transfers to BIG, and whatever changes are made should be fully implemented by the Fiscal Year budget of 2023.

Fisher also said the city’s general fund will be negatively impacted over the next two to three years by just under $200,000. The city will receive $120,000 per year by leasing the collection/transfer station, will receive a 7 percent franchise fee on recycling, and will not need to pay for its own sanitation services at city facilities.  However, that will be offset by the loss of sanitation’s shared service transfer, expected to cost the city $351,000.  Since BIG has its own internal administrative departments such as human resources and information technology, it will not need to use the city’s administrative departments, which the city’s sanitation department utilized.

The city will also need to pay property taxes on the collection/transfer station. Fisher said, while the city will be able to bridge the impact to the general fund through the sale of equipment, that funding will be a one-time revenue source, whereas the aforementioned costs affect the city annually.

Fisher said the city will need to figure out how to overcome this “deficit” of roughly $200,000 over the next few years. He recommended looking into examining personnel costs such as healthcare, outsourcing additional services—specifically naming street services—without affecting day to day operations, and reviewing its current interlocal agreements.

Fisher noted the city would have looked into these costs even if the outsourcing of sanitation was not on the table, as the city is currently juggling several capital projects. He said he is confident the city will be able to find savings over the next two to three years to minimize the direct impact of the transition on the budget.

The commercial portion of the contract with BIG will come before council at its meeting next Thursday, with the residential and collection station contracts coming in the spring.