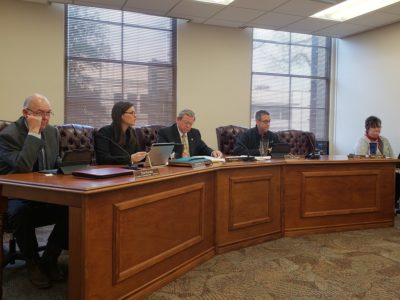 Washington County Commissioners approved a water line extension agreement with the City of Brenham for the new Road and Bridge facility at today’s (Tuesday) meeting.

The agreement with the city covers construction and engineering costs to extend the 12-inch water line 3,100 feet. Costs are currently expected to exceed $390,000, although Commissioner Kirk Hanath noted there is a 15 percent contingency that may not be spent.

County Engineer Ross McCall said the line should be placed within the right-of-way of TxDOT, so there aren’t any expected easement costs. Commissioner Don Koester stated that the county would have had to pursue other, costlier avenues, such as drilling a well, if not for the agreement with the city.

The stabilization process is expected to take four weeks, up to six if there is bad weather. If the county were to perform the work in-house, costs were estimated at over $380,000.  Koester said not only would costs be higher, but Road and Bridge workers would be pulled away from working on repairing county roads.

In November of 2018, commissioners held off on accepting this alternate when they agreed upon the $4,081,000 bid for the facility.

Commissioners also opened and discussed, but did not act upon, a bid submitted for an oil and mineral lease on over 10 acres of county-owned land in Precinct Four. The lone bid was submitted by Eagle Valley Energy Partners LLC, for a term of three years and a royalty of roughly 25 percent.  The delay rental is $60 per acre, or $627 per year, while the bonus is $1,100 per acre, or $11,500 per year.