Portions of an agreement between the City of Brenham and Brannon Industrial Group (BIG) to outsource sanitation operations will come before the Brenham City Council tomorrow (Thursday) for a vote. 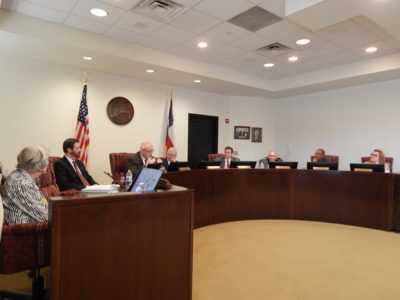 After discussing details of the agreement for several months, councilmembers will consider their first vote on the measure. Tomorrow’s council vote only covers the base agreement, general terms and conditions, and the transfer of commercial waste collection and recycling services.

During two work sessions with councilmembers on February 6th and February 13th, city staff outlined the general terms of the contract and explained that the full implementation of the contract would be a stair-step process over several months.  The portions of the agreement covering the transfer of residential waste services and operation of the collection/transfer station will come before the council later this spring.

Monday, the city issued a press release addressing many frequently asked questions pertaining to the agreement, which has become a topic of discussion and debate for many Brenham residents.

Also in session tomorrow, the council will hold work session discussion on the organization and responsibilities of a historic preservation ordinance committee for the city. Earlier this month, a public meeting was held to discuss the ordinance, which would put preservation methods in place to protect historic properties and local landmarks.

The council will then adjourn into executive session to consult with the city attorney and, upon leaving executive session, potentially act upon the development, operation, and possible acquisition of the Barnhill Center at the Historic Simon Theater.

The council will meet tomorrow afternoon at 1 p.m., at Brenham City Hall.